Two iconic Blackpool streamlined trams preserved at the National Tramway Museum have recently spent some time in the Crich workshop, for very different reasons. The appearance of Blackpool Brush Railcoach 298 in the works recently led to a great deal of speculation – most of which has turned out to be overly optimistic – but the subsequent arrival of Blackpool Boat 236 will have more obvious and positive consequences in the short term future.

Brush car 298 must surely be one of the most neglected trams at Crich, having sat untouched in the depot complex since its arrival at the museum in September 2005. Prior to this, the tram received considerable attention from supporters of the ‘Blackpool Railcoach Fund’ to return it to its original appearance, and it arrived with a sum of around £125,000 which was expected to allow the car’s restoration to be completed at Crich. Sadly however, no further progress has been made since, with suggestions since being made that the previous work is not up to the required standard for operation at Crich, and that the sum of money available is well short of what is needed to return the tram to a fully operational condition. Therefore, 298‘s appearance in the workshop was greeted with a mix of excitement and disbelief, but optimists were quickly left disappointed when it was revealed that the tram was merely being examined. The aim here is to assess its current condition, as well as producing a report showing what items exist and what, if any, are missing. This will then allow a more accurate report on the work required to restore this tram to be compiled.

Although this was admittedly a slight disappointment, it is pleasing to see even this level of attention being given to a tram which tends to create heated discussions amongst enthusiasts whenever it is mentioned. Obviously a large amount of funding will be needed if the car is to be fully restored in the Crich workshop, and this work is unlikely to be tackled until the next major project – the restoration of LCC 1, AKA ‘Bluebird’ – is completed, and even then it would almost certainly depend on whether suitable funding could be found. Although seemingly dismissed by senior TMS members, the option does however exist of having the necessary work undertaken elsewhere under contract, with Blackpool being one possible option. Hopefully this small development will mark the start of an upturn in 298‘s fortunes, as the restoration of a Blackpool Brush Railcoach to its original condition would undoubtedly create a unique and stunning vehicle. Although numerous Brush cars are preserved, only three are currently active: 623 at Heaton Park, 630 at Crich and 631 which remains at Blackpool. As none of these trams are in anything even close to their ‘as-built’ condition, the argument for completing the work on car 298 is certainly a strong one!

Once moved back into the main depots for continued storage, 298‘s spot in the workshop was taken by fellow Blackpool tram, Open Boat 236. It may be recalled that this tram was fitted with orange festoon lights earlier in the year, although these had not been wired up. The final electrical work has now been completed, and the car has been fully illuminated within the confines of the workshop, the results being absolutely stunning! Weather permitting, it is hoped to unveil the newly illuminated Boat car at this year’s Starlight Halloween event on Saturday 26th October which should certainly cause heads to turn! 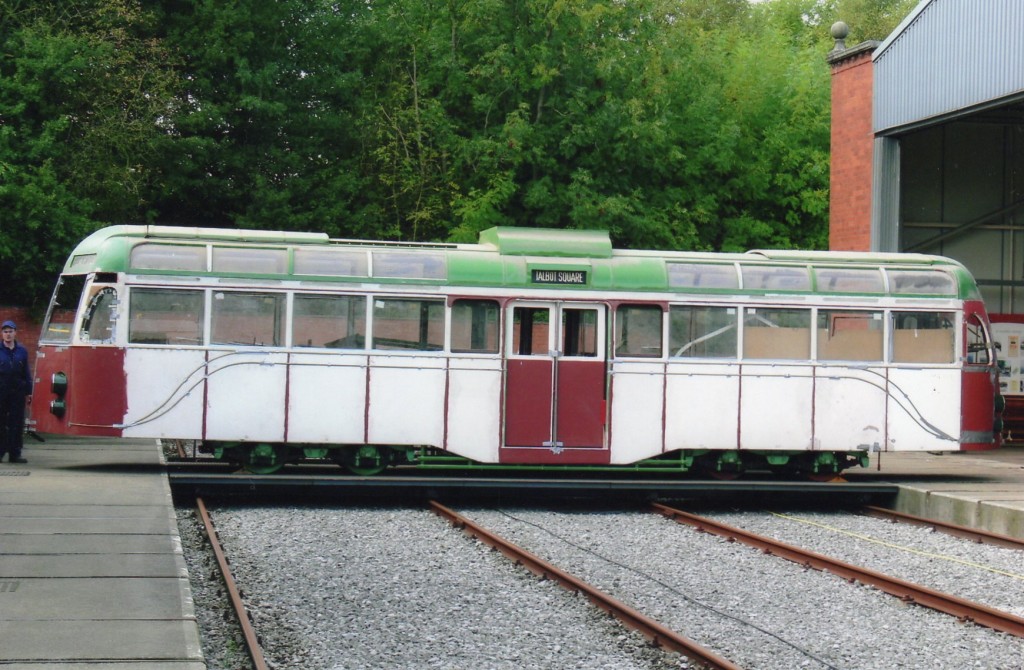 Blackpool 298 doesn't often emerge in daylight, but is seen here being moved on the traverser at the 2007 Crich Enthusiasts Day. (Photo by Tony Waddington)