Tony Hill, the recently appointed General Manager of the National Tramway Museum at Crich, has confirmed that there will be a number of small but potentially significant changes made at the Crich Tramway Village in 2014, to enhance the visitor experience. The museum has been suffering badly from ever decreasing visitor numbers for a number of years, but this is a clear indication that serious efforts are now being made to reverse this negative trend.

Mr Hill has declared that the attraction currently offers significantly better value for money to its visitors at weekends than it does on weekdays, and one of next year’s key aims is to offer increased interest on ‘off-peak’ days. It has been agreed that at least three different trams will operate on every day the museum is open next season; presumably this means that crews will be required to swap trams on many occasions, as the museum has often struggled to run two cars lately. It is also planned to display some trams that are not required for service on the depot fan on a daily basis, at pre-advertised times twice a day. These steps will make more of the national collection more visible to visitors on normal open days, and should help to keep paying guests entertained at no additional expense to the museum. Other regular activities, including collection handling sessions and guided tours of the workshop, are also proposed for the 2014 season.

Other innovations to be introduced next season should include a new tram stop at Glory Mine, offering passengers the first opportunity to board and alight trams at this location on a regular basis since the line was extended to this point well over thirty years ago! Although occasionally, enthusiast specials have included photo stops, leaving trams at the terminus has normally been strictly off limits and this should greatly add to the enjoyment of visitors, offering enthusiasts an excellent new vantage point for tram photography, and the general public the chance to savour the fantastic views of the Derbyshire countryside. Improvements to the admissions area and the catering facilities on offer are also planned, as well as the provision of a new children’s play area.

Perhaps of most interest to readers of this website, plans are now beginning to emerge regarding events to celebrate the 50th anniversary of the electric tram service at Crich next year. Highlights will include an exhibition to commemorate this important milestone in British tramway history, whilst a major enthusiasts weekend event will feature ‘an exciting and challenging 25 tram spectacular’! Assuming this figure refers to trams that will be operating, this should certainly be a spectacular event, especially as the current operating fleet at Crich consists of a mere 16 cars (plus works cars, Cardiff 131 and the Blackpool electric locomotive, and Sheffield horse car 15). Another major event is also planned to co-incide with the return to service of Sheffield 510 following major workshop attention. With Blackpool Jubilee car 762 also expected to be launched in 2014, this should be a good year for Crich with plenty to keep regular visitors coming back for more! The established 1940s, Edwardian and Halloween events will also return next year.

2013 has not been a good year at all for Crich with falling visitor numbers, stagnating special events and a dwindling number of operational trams available for use – but the signs suggest that 2014 will hopefully be a much better year for this museum. Here’s hoping that the negative trends can be reversed, and although most of the measures described above are relatively small, they should make a big difference and hopefully will enable the National Tramway Museum to survive and thrive for the foreseeable future. 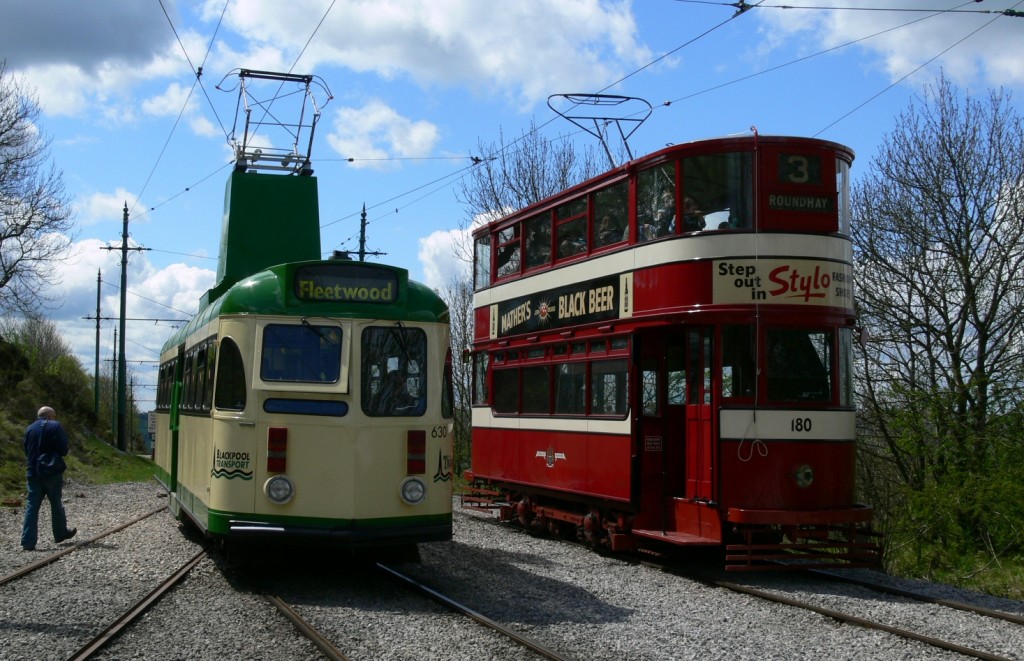 Previously rare scenes such as this one, of trams at Glory Mine, should become commonplace next year with the creation of a proper passenger stop at this picturesque location. Leeds 180 and Blackpool 630 dominate this scene, taken during the 2012 Brush car event. (Photo by Tony Waddington)