Posted on Friday 8 April 2022 by Gareth Prior

Over the next few weeks we will be taking a look at another set of shots Donald Brooks took in the early September of 1976 in Blackpool as “Picture in Time” continues.

Balloon 705 is one of the trams on the Blackpool Tramway which for many reading this website they will never have seen in service as it has now been over 40 years since it did last run with passengers on board. It was 22nd July 1980 that the tram was involved in a collision with fellow Balloon 706 at Pleasure Beach which led to both the trams having to be withdrawn from service. Whereas 706 would receive major work in the workshops to return it to an open topper, 705 would not be so lucky and indeed would be the first of the Balloon Cars to be scrapped. This work took place in October 1982 at Blundell Street bringing an end to its 48 year long career.

In the below photo we see 705 standing at what we know consider as the North Pier tramstop while running a service through to Starr Gate. Between deck adverts for Empire are carried. Immediately behind is another Balloon car although it doesn’t seem to have any numbers above the Corporation crests on the side. It looks as if it is a second series car and is running back to depot with Manchester Square visible on the destination blinds. It too has between deck Empire adverts. 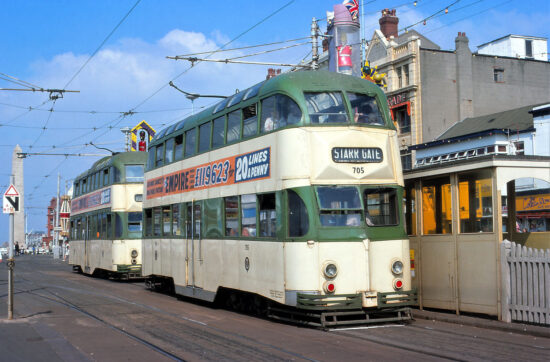