In Pictures: Back to the Newhaven end of the Edinburgh Trams extension

Posted on Friday 25 February 2022 by Gareth Prior

We head back to Edinburgh in this latest pictorial construction update. This time we are at the Newhaven end of the Trams to Newhaven project as we see recent progress on the works at Leith Docks, Ocean Drive and Melrose Drive.

As a reminder the Trams to Newhaven project is due to open in Spring 2023 and will see a further 2.91 miles (4.69 kilometres) of double track added to the Edinburgh Trams network. Eight new stops will be provided at Picardy Place (replacing York Place), McDonald Road, Balfour Street, Foot of the Walk, The Shore, Port of Leith, Ocean Terminal and Newhaven. There will also be limited stabling facilities at Newhaven to allow trams to be out stationed there overnight for late evening and early morning services.

Construction works started in November 2019 with the route split up into various sections and the “one spade” approach used to avoid one set of contractors doing one job, the section reopening to traffic and then another set of contractors coming along later to complete the job. Despite a few challenges over the past couple of years the project remains within the revised budget and is on time. 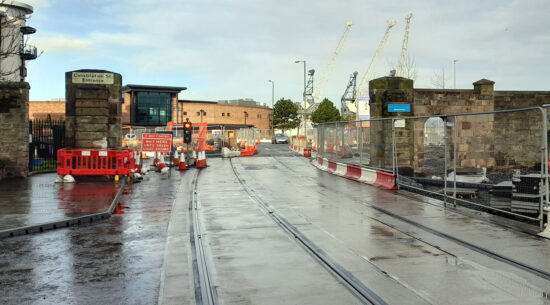 A week ago British Trams Online posted a shot of the work on the stone pillars at the entrance to the old Leith Docks. Only one and a half pillars had been completed. A week on from that and both pillars are now completed. 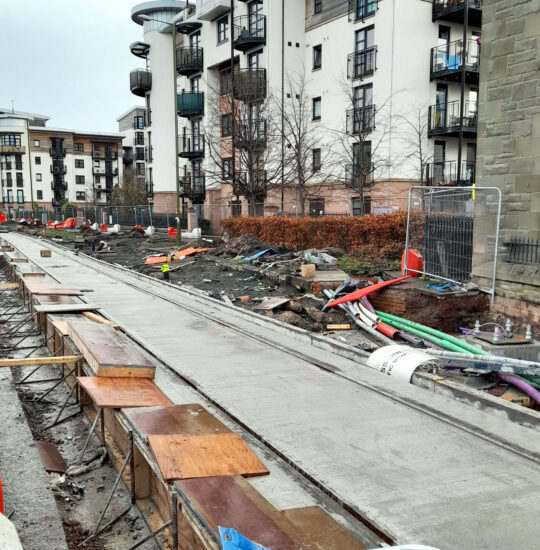 Track has now been laid on the south side of Ocean Drive at Stevedore Place. This track will take the trams towards Newhaven. Track was laid on the north side some time ago and is already being used by ordinary traffic. 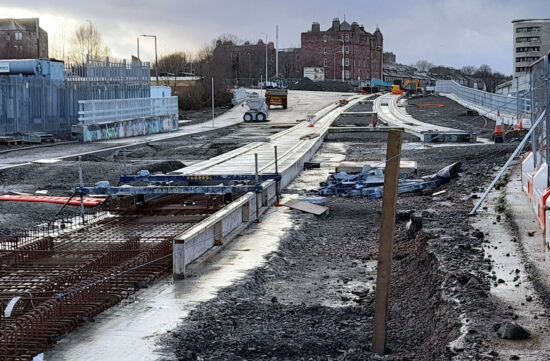 Further track has been laid on the new ramp bringing the track from the Newhaven terminus down to Melrose Drive. The Newhaven terminus is to the left of and just beyond the white building on the right of the photo and Melrose Drive is in the foreground. With new traffic diversions in place, work has now started on connecting this track to the track at Ocean Terminal. (All Photographs by John Hampton, 20th February 2022)