As a result of the cancellation of this event the need for the trams to run overnight has gone and so these free trams will not be running and it will be back to normal hours of operation. On a more positive note the cancellation of the event means it won’t be necessary for trams to turn back at West End so a full service will continue to operate on New Year’s Eve until last trams at 2330 from York Place to Airport and 2248 in the opposite direction. 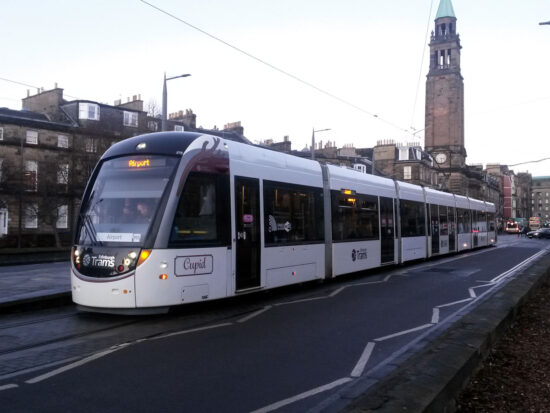 Although there are extra restrictions now in place in Scotland Santa’s reindeer are still in town! The second of the trams spotted with reindeer names is 275 – still retaining its plainer fleet livery than usual – which is named Cupid on one end and Vixen on the other. Taken at West End this view shows 275 off to the Airport with the Cupid name showing. (Photograph by John Hampton)