In Pictures: Balloon 723 goes on The Magical Express Tour

Posted on Saturday 20 November 2021 by Gareth Prior

New adverts always used to be part and parcel of the Blackpool Tramway as each year we waited with anticipation to see which trams would get new designs. But with the advent of the upgraded tramway new adverts started to reduce (there have only been 6 adverts on the Flexity2 trams in almost 10 years) and for the traditional trams they have obviously been almost non-existent (with the exception of Centenary 642’s Travelcard design and Brush 634’s Terror Tram advert which has yet to be seen in anger) – until now! As part of the new Magical Express Tour which is running in conjunction with the Christmas by the Sea event taking place on the Tower Headland, Balloon 723 has received an all new vinyl wrap which certainly marks a big change for the tram!

Being applied over its popular 1980s Green and Cream livery style the vinyls on 723 are thankfully clear of contravision on the windows (that would have rather defeated the object of using the tram on these special tours!) with various wintery images included. It is a relatively simple advert with a black base and features an ice rink (which is part of the Christmas by the Sea attractions) as well as snowmen and people doing what people do around this time of year!

Perhaps two of the more unusual aspects of the livery are that vinyls have covered the destination screens with a special “The Magical Express Tour” included on this section and that there are no external fleet numbers (but it is definitely 723!).

723 will be the tram of choice for The Magical Express Tour which runs from North Pole (North Pier and Tower which has had a bit of a makeover for the occasion) to Pleasure Beach and back every 30 minutes on selected dates between now and 3rd January 2022:

Tours cost £4 for adults and £2 for children and can either be booked online at https://blackpoolheritage.com/tours/the-magical-express-tour/ or you can just turn up and go on the day. 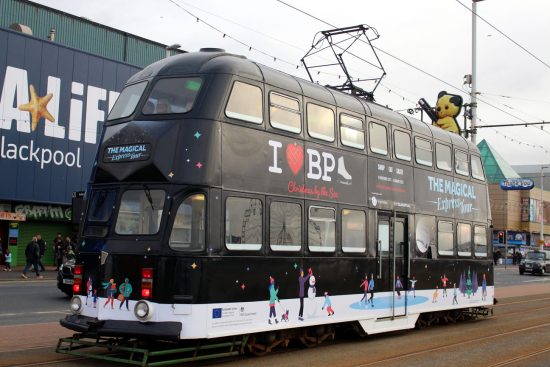 Balloon 723 on Central Promeande as it heads south outside SeaLife Blacpool. 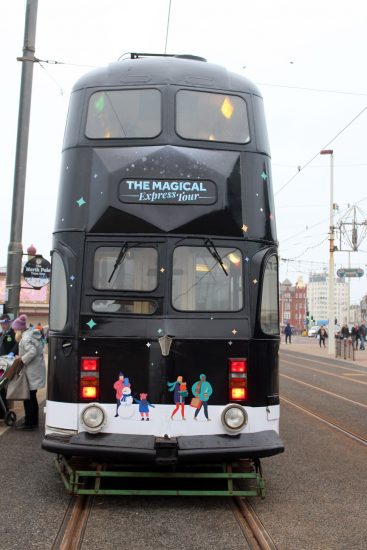 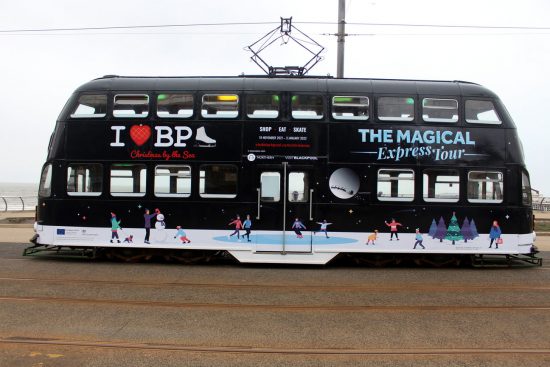 A side-on view of 723 at North Pole showing the full effect of the new vinyls. 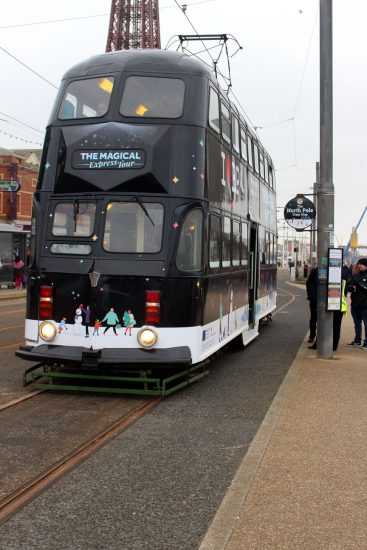 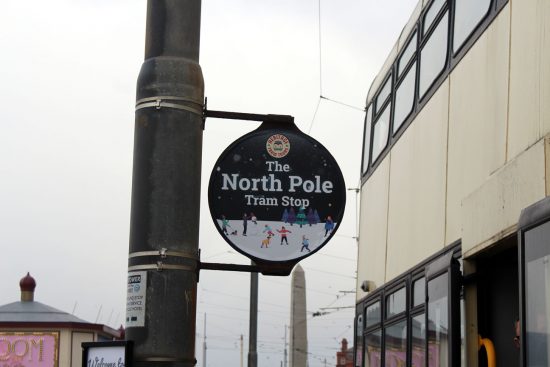 A close-up of the new North Pole tramstop sign which has been applied over the old style Heritage Tram Tours logo. (All Photographs by Tony Armitage, 20th November 2021)

6 Responses to In Pictures: Balloon 723 goes on The Magical Express Tour