Over the weekend of Saturday 25th and Sunday 26th September all eyes were on the Blackpool Tramway with a weekend of events to celebrate the anniversary of the opening of the tramway with it celebrating 136 years of operation in 2021. The weekend would see the return of hop-on, hop-off heritage tours, behind the scenes depot tours at the newly christened Tramtown and withdrawn trams on display on Blundell Street and the depot fan. Read on for a diary article on what happened, starting on Friday 24th September.

Whilst not part of the official Anniversary Weekend events there were still heritage trams out and about on this day. As is normal during the illumination period, Friday afternoons sees a single heritage tram run a Coastal Tour (to Fleetwood) and a Promenade Tour (to Little Bispham). On this day the double-decker allocated to these duties was Red and White liveried Balloon 701.

The evening was then busy for heritage trams with not only Illumination Tours running from Pleasure Beach but two further tours operating from North Pier and Tower. Those two additional tours were “The Ghost Tram” and “Fish and Chips Tram” with Balloon Cars 715 and 717 respectively completing these tours. Meanwhile Illumination Tours were in the hands of the Western Train and the Frigate which ran two tours a piece.

Onto the main events over the weekend and a six tram (five for most of the day before an extra tram came out in the mid-afternoon) hop-on, hop-off Gold timetable was in operation. Most of the trips were just turn-up and go although there remained a few which had been pre-bookable but with any spaces available to holders of Heritage Travelcards.

The day’s passenger workings started with Centenary 642 departing from North Pier and Tower just after 1030 with a service to Thornton Gate and during the day it was joined by Boat 227 (a late replacement for fellow Boat Car 600), Brush 621, Balloon 715, Bolton 66 and for two afternoon trips, the Illuminated Frigate. 642 suffered a brake fault in the middle of the day and this led to a trip to Starr Gate being terminated short at Pleasure Beach with the tram being returned to depot and swiftly replaced in service by Balloon 717.

The evening then saw five Illumination Tours run with Balloon 717 and the Frigate running two each and the Western Train one.

Meanwhile, down at Tramtown OMO 8, the Trawler and Engineering Car 754 were displayed on Blundell Street while it was also possible to see Coronation 663, Open Top Balloon 706 and Twin Car 675+685 on the depot fan.

Second day of the weekend and another six tram hop-on, hop-off heritage service was in operation. Unfortunately, the hoped for debut in passenger service for Balloon 700 in its Wartime livery wasn’t possible as it suffered a fault but the day saw Bolton 66, Boat 600 (a replacement in the advertised output for 227, which had replaced 600 the previous day!), Brush 631, Centenary 642, Balloon 701 (the replacement for 700) and the Illuminated Western Train.

Rebuilt Balloon 707 was again the Shop Tram and the same trams were displayed at Tramtown with OMO 8, the Trawler and Engineering Car 754 on Blundell Street and Coronation 663, Open Top Balloon 706 and Twin Car 675+685 on the depot fan.

Onto the evening and there were three trams and six Illumination Tours with the Western Train, Frigate and Balloon 717 all out and about. 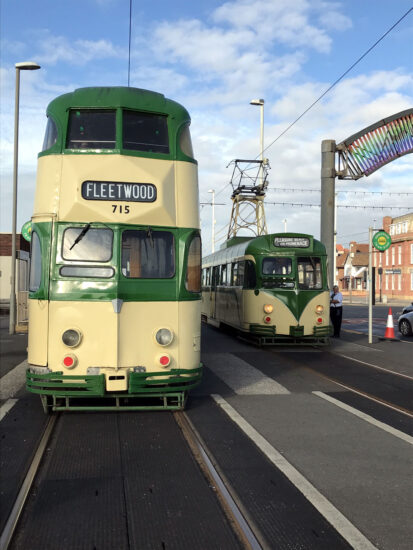 A scene from the weekend at Bispham where Green and Cream trams meet – Balloon 715 is heading north to Fleetwood and Brush 621 is going to Pleasure Beach. Saturday 25th September. (Photograph by David Harrison) 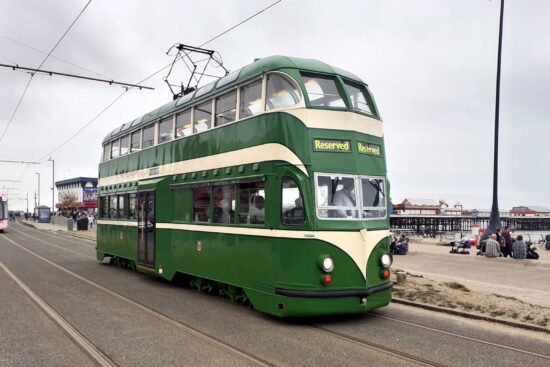 In its incredibly brief appearance on the mainline here we see Balloon 700 at Central Pier on 25th September. (Photograph by Malcolm Slater) 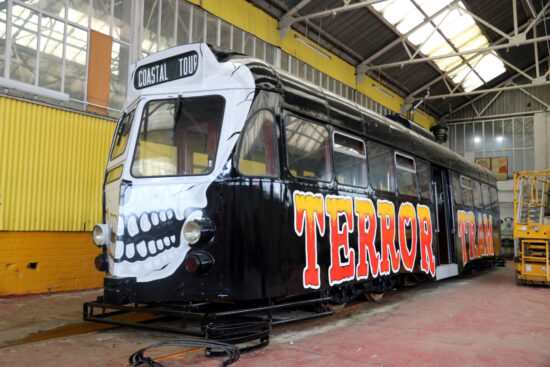 The weekend also gave the opportunity to see behind the scenes at Rigby Road Depot which included views of the Fylde Transport Trust’s Brush Car 634 which is being repainted into an approximation of its old Coral Island Terror Train advert. We see that tram in the Paint Shop. (Photograph by Steven Hughes)