Around the World in Trams: Biddeford and Saco Railroad 31

Posted on Saturday 28 August 2021 by Gareth Prior

Today we make a brief trip across to the United States of America as we take a look at the founding trolley car of the Seashore Trolley Museum.

Biddeford and Saco Railroad 31 is the Southampton 45 of the Seashore Trolley Museum being the first tram to be preserved as part of the collection. Built in 1900 by the J.G. Brill Company it features 12 benches. Powered by a trolley pole it has two J.G. Brill Company 22E trucks and a General Electric model 200 traction motor. It operated for almost 39 years in the state of Maine before it was preserved in 1939. Having been purchased by a group of eight enthusiasts they moved it to what would become the home of the Seashore Trolley Museum that same year.

This photo was taken during the 80th Anniversary of the Seashore Trolley Museum on 6th July 2019 and shows the trolley during the parade that marked the occasion. 31 rightly led the way during this special parade. 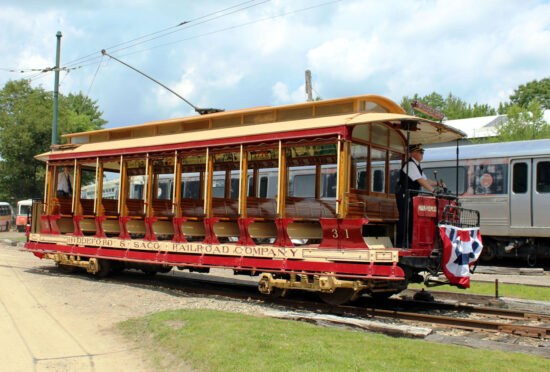 1 Response to Around the World in Trams: Biddeford and Saco Railroad 31