Posted on Friday 6 August 2021 by Gareth Prior

Crich is again the location for this edition of “Picture in Time”.

For a tram which hasn’t run at Crich since 1985, New York 3rd Avenue 674 still seems to get featured on these pages quite a lot! This car was originally built for New York in 1939 but would only run in the USA for five years before withdrawal came. But this wasn’t to be the end for the tram as in 1948 it was one of a number which were exported to Vienna and it happily entered service there running until 1969 when a second withdrawal would come. Saviour following that came by its preservation and it was transferred to Crich in 1970 entering service in its guise as Vienna 4225. It remained with this identity until 1979 when it received a repaint and a return to being New York 674. It would stay operational until 1985 at which point it was withdrawn and is now on static display.

This view shows 674 at the Town End terminus on 27th August 1979 with another foreigner behind – Johannesburg 60. 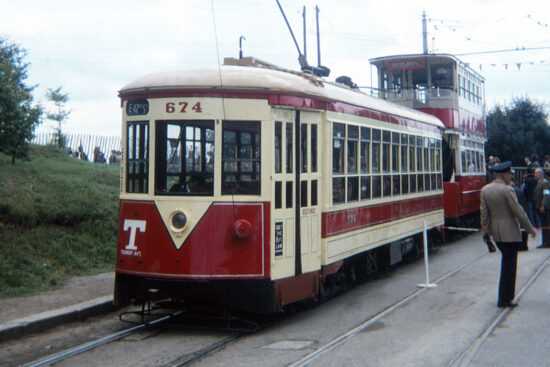