Posted on Monday 2 August 2021 by Gareth Prior

Its probably fair to say that the redevelopment of Douglas Promenade has not been the smoothest civil engineering project out there. With delays, cost overruns and what seems to have been constant changes it has caused disruption in Douglas for several years. For many readers of British Trams Online the key aspect of the project has been the relaying of the Douglas Bay Horse Tramway tracks and in this update we take a look at some of the works which have been taking place at what will be a temporary terminus at Broadway just beyond the Villa Marina. Jim Smythe with the photos.

Just before Tynwald broke up – in its last sitting of the current administration with elections due to take place last this year – an update on the general Douglas Prom works was given and although it gave no specifics on the horse trams it confirmed that work is scheduled to be completed by the end of September and that the work has already exceeded the budget by £3 million.

Currently the tram tracks are only being installed as far as Broadway with a temporary terminus currently being installed there. As things stand at the moment it looks like another vote will have to take place with the new administration as to whether finds can be released to construct the single track line through to the Sea Terminal.

No services have run on the horse tramway again in 2021 – and its looking increasingly like that will be how it remains – and it also missed the complete 2020 season as well. Maybe in 2022? 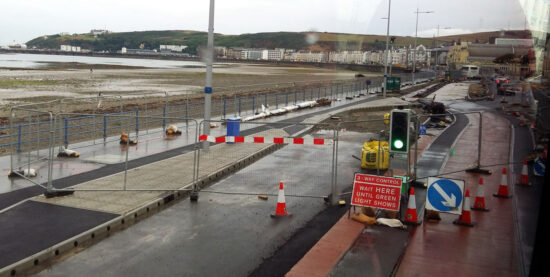 Taken from the top deck of a bus running along the Prom we are outside the Villa Marina here with the traffic controlled by temporary traffic lights. The red/pink tram corridor can be seen and we can also see some track in the distance. 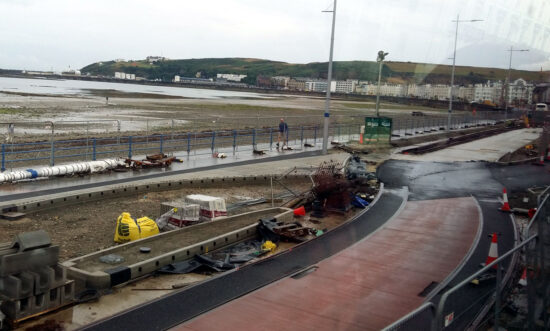 As the bus continues alongside the worksite we can see the already installed tracks curving across the road to the sea side of the Prom and towards the terminus at Broadway. 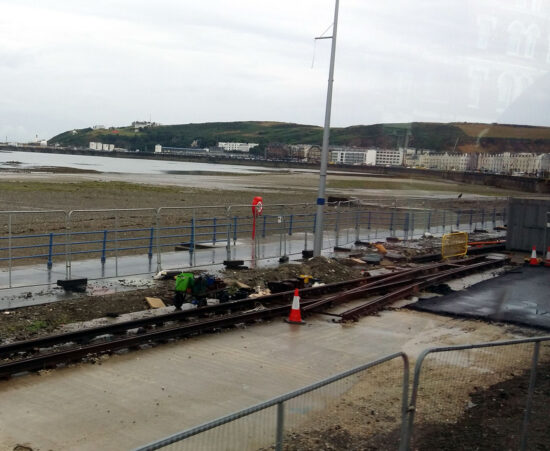 Points are in position at the terminus but has not yet been connected to the curve. (All Photographs by Jim Smythe, 30th July 2021)