The next location for our non-Blackpool Traditional Trams “Picture in Time” series is Crich with a selection of photos which were taken on 27th August 1979 – August Bank Holiday Monday.

The first tram we feature is Paisley 68 which has long been a popular member of the operational fleet of Crich. Today, of course, it has returned to its identity of Glasgow 1068 (which it took when Paisley’s undertaking was taken over by Glasgow Corporation in 1923) but up until 2012 it was Paisley 68 when it ran at Crich. It also made a visit to the Glasgow Garden Festival in 1988 as well as to Beamish in 2013.

In this photo we see 68 at Wakebridge with passengers attempting to alight at the front as others board at the back. Glasgow 22 is following on behind. 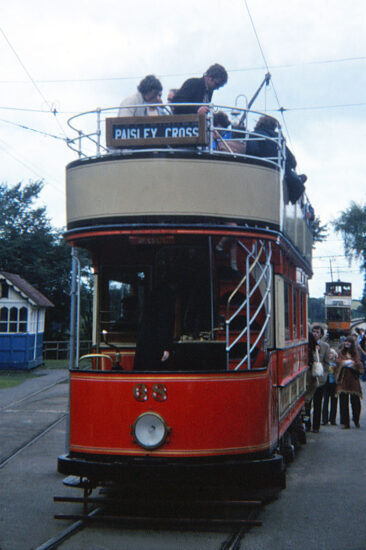