We have a taste of Portugal in this edition of “Whatever Happened To?” as we feature Oporto 273 which was another of the passenger trams running during Crich’s Tramathon in June 2005.

Semi-convertible tramcar Oporto 273 was built in 1928 and joined the national collection as part of their aim to show the key historical developments in traditional trams. It was one of eight trams built at this time and they would all remain in service until the 1990s at which time the Tramway Museum Society were interested in acquiring a semi-convertible tram. So it was that after withdrawal in 1995, 273 became part of the collection at Crich and would then be restored to its post-war condition between 1999 and 2001. By the 2005 Tramathon it was into its third year of operation and still had that novelty factor for visitors.

273 remains part of the operational fleet today – it did run briefly in 2020 before the first lockdown and has run during 2021 – but has spent some time out of service over the past 16 years requiring workshop attention. It also escaped Crich in 2010 for a guest stint in Blackpool for the 125th Anniversary of the tramway, unfortunately, while there it suffered a fault and wasn’t used in passenger service but at least it got a trip to the seaside! 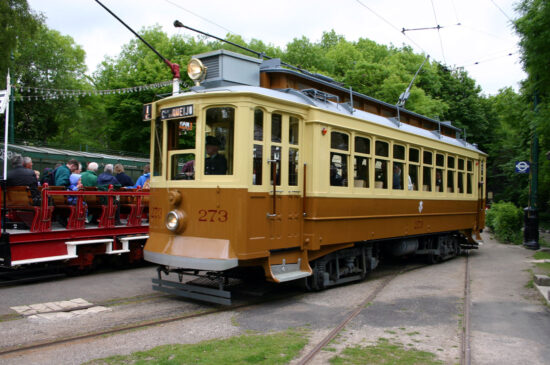 Oporto 273 at Wakebridge on 12th June 2005 when working a service up to Glory Mine. The weather didn’t lend itself to its semi-convertible nature though as all windows are firmly up! 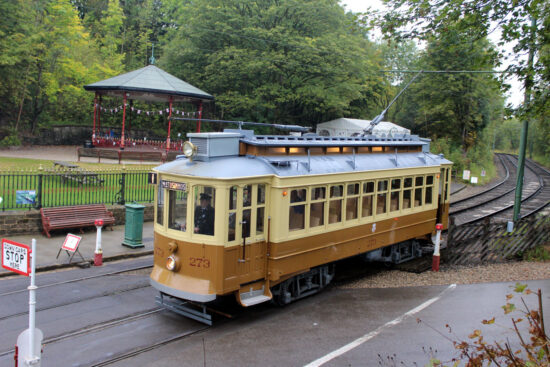 Another day when it couldn’t demonstrate its semi-convertible nature was 22nd September 2019 as its seen passing Victoria Park on the way back to Town End. This was, again, the Crich 60 event. (Both Photographs by Gareth Prior)