And we finally reach the end of this second part of our “Stop by Stop” series on Nottingham Express Transit with the tram terminating at Toton Lane.

We depart from Inham Road and cross over that road to allow us to run on the final stretch of line to Toton Lane. As we have been since departing from High Road – Central College (save for a few short stretches) we are on segregated track with this section seeing a unsurfaced footpath alongside which still allows us to continue our walk next to the trams. Often just before the stop trams will come to a stop at the signal waiting for the right of way to terminate. As we saw with the terminus at Clifton South, Toton Lane has three platforms on two platform faces with platform A and C on the right as we approach the stop and platform B on the left. Platform C is furthest from the buffer stops and not often used with both A and B used for departures, at times there will be two trams in the stop allowing plenty of recovery time in case of delays. As well as full canopies on the platforms and ticket machines the end of the stop also has The Platform Kiosk whose profits go to the Forever Stars charity. And a large Park and Ride car park is located here along with regular bus services. 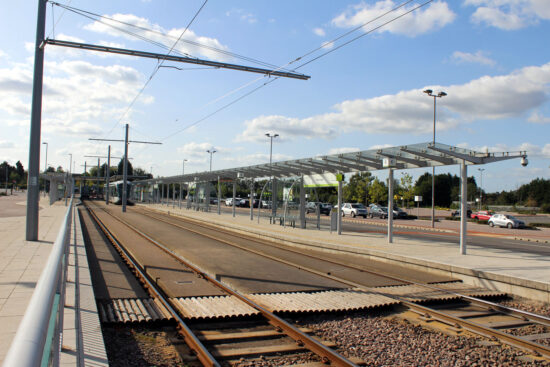 A general view of the stop looking towards the end of the line. The kiosk is on the right just beyond the tram which is in platform A, platform C is on the right and funnily enough that means platform B is the platform on the left hand side! The large car park surrounds the tramway on both sides. 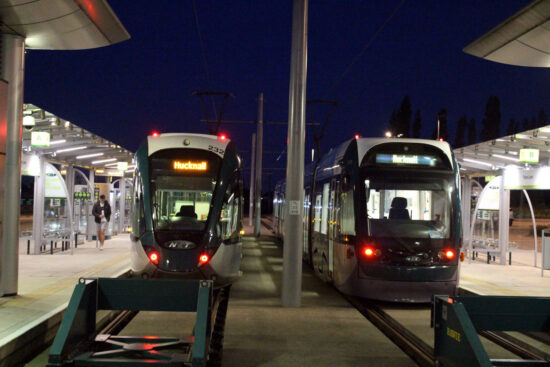 An after dark shot on 18th September 2020 at Toton Lane showing the two main platforms occupied. On the left is 232 with Incentro 205 alongside. 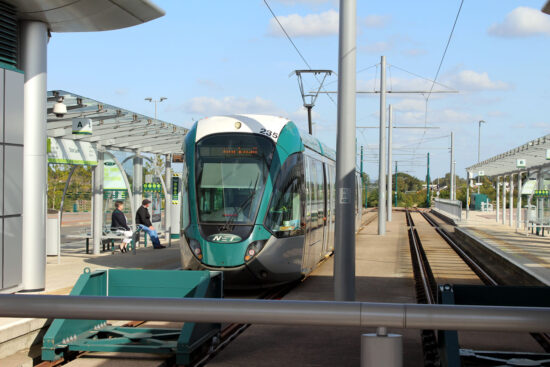 The final photo of this series of shots on the Nottingham Express Transit Toton Lane taken on 19th September 2020 shows 235 at platform A. (All Photographs by Gareth Prior)