Posted on Saturday 3 July 2021 by Gareth Prior

Its off to Edinburgh for this edition of “Lockdown Walks” as we venture out of the city centre to Gogar Depot.

Built for the opening of Edinburgh Trams, the depot at Gogar houses the 27 strong fleet of CAF built Urbos trams. These seven section trams were ordered at a time when the full Edinburgh Trams project was due to be built all in one go and were one of the only aspects of that original project which went according to plan. There were some attempts to sub-lease these trams elsewhere but this proved not to be possible and so despite the system no longer requiring all 27 they have all remained in the city and except for maintenance and repairs have remained in service. 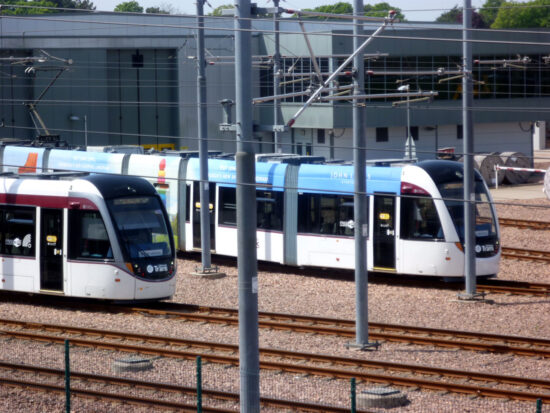 This view at Gogar Depot shows 258 as the furthest tram in an advert for John Lewis which had only been applied to the tram a few days previous. John Lewis’ Edinburgh store has recently had a refresh of its own and is due to be integrated with the new St James Quarter from 24th June. This photo also shows the control room behind the upper windows on the right while the fence in the bottom right is the southern boundary of the depot which separates the depot from the tramway’s two running lines (not visible). (Photograph by Roy Calderwood, 2nd June 2021)