After 78 editions we come to the end (for now?) of our “Still Standing” series as we take a look at old tramway infrastructure still in situ, even if it was being used for something very different to its original purpose. Throughout this series  we have featured buildings, track, poles, rosettes and even section boxes nowhere near a tramway route but this is a first – it’s a manhole cover! Located in Atherton, Greater Manchester the history of its ownership can clearly be seen.

The South Lancashire Tramways Company ran from 1902 to 1933 with a 39 mile network stretching from what is now Merseyside to Greater Manchester with Atherton as the hub of the system. It has connections with through running to other tramways in the area before at the start of the 1930s the company sought powers to replace trams with trolleybuses. 3rd August 1930 saw the first route transfer operation before on 16th December 1933 the route between Leigh and Four Lane Ends became the last line to succumb.

Some parts of the South Lancashire Tramway Company are still extant today, including tram no. 65 which is in an unrestored state at the Greater Manchester Museum of Transport, but one of the more unusual – and less likely to be noticed! – survivors is this manhole cover which had an unknown purpose. 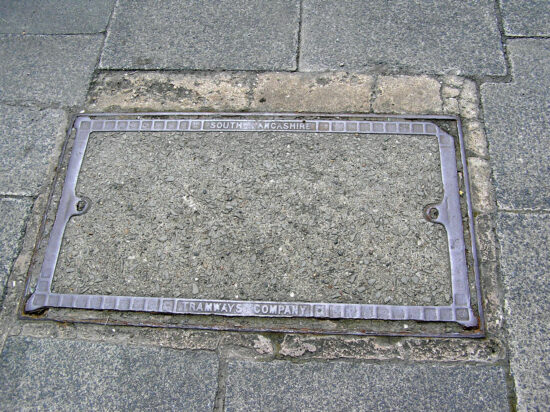 * And so that is the end of “Still Standing!” We do hope to return to this series in the future but in order for this to happen we need extra contributions to allow it to continue. So, if you know of any structure still in existence from a first generation tramway please let us know and if you can provide photos and information that is even better! To take a look at those locations previously featured you can visit the Still Standing! list at http://www.britishtramsonline.co.uk/stillstanding.html – there are some old structures we know about but haven’t featured in the series, if that’s the case then there is no link on the right-hand side otherwise each one gives a link to the original article. And if you want to go through all those articles we have run over the pasy 18 months go to http://www.britishtramsonline.co.uk/news/?cat=79 which lists every single one!