In Pictures: Supertram’s Citylink 399 205 back in service

As we’ve mentioned a few times before during the pandemic, with reduced frequency services being operated on many tramways in the UK there have been some trams which haven’t been seen in service for some time. This has seemed particularly prevalent on Stagecoach Supertram and included Citylink Tram-Train 399 205 which had been out of service for at least four months – that was until Thursday 17th June!

205 is one of the Citylink vehicles which is fitted with conventional wheelsets to allow it to run on the main tram network and after its four month sojourn it was allocated to the Blue route between Malin Bridge and Halfway to mark its return to action. 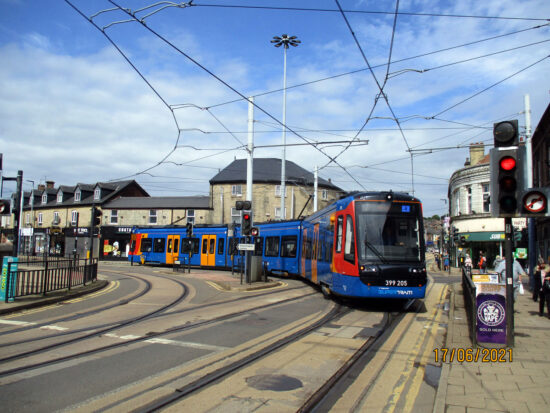 Here we see 399 205 just turning from Holme Lane on the approach to Hillsborough. It is near the start of its journey from Malin Bridge to Halfway. (Photograph by Stuart Cooke, 17th June 2021)