Back to Sheffield for this latest “Lockdown Walk”.

When the Supertram system first started to run on 21st March 1994 it was only a fraction of the network we know today with trams running from Meadowhall just into the city centre at Fitzalan Square. It wasn’t to be until 18th February 1995 that trams would get further into the city centre when they continued along High Street to Cathedral. Its on this latter section of track that we see in the below photo with the one-way High Street for traffic seen on the left and the segregated double track tramway on the right. 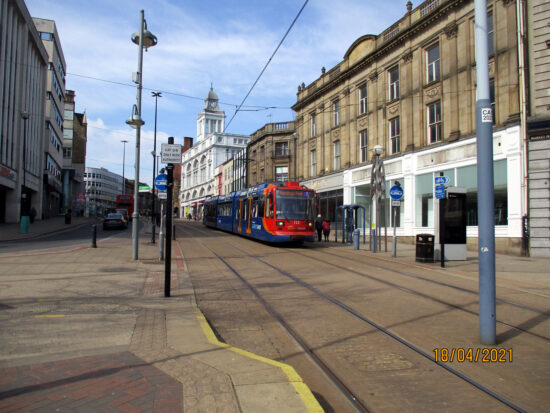 The tram seen here is 123 which is running between Cathedral and Castle Square as it works a Purple route service to Herdings Park. This tram retains the 21st anniversary Pete McKee window vinyls. (Photograph by Stuart Cooke, 18th April 2021)