Posted on Wednesday 9 June 2021 by Gareth Prior

Another trip to Edinburgh in this edition of “Still Standing!” and it’s the Cable Tramway which has again attracted our interest as we find a small section of surviving track.

We’ve seen various pieces of surviving infrastructure from the Edinburgh Northern Tramways cable system in this series and this time around we see a short stretch of track which can be found in the middle of Waterloo Place. This is an eastbound extension of Princes Street and was the terminus for cable trams on the route to Joppa – the last of the cable tramway routes to close in June 1923. As can be seen in the below image there was a centre conduit for the cable to be attached to the tram to allow it to operate along its route. 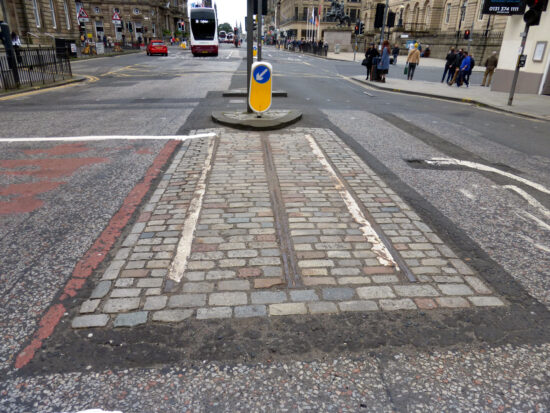 The track in situ complete with the cobbles – nearly 100 years after the route was abandoned. (Photograph by John Hampton)