Posted on Wednesday 2 June 2021 by Gareth Prior

This time in “Still Standing” we take a trip to Suffolk to view the former tram depot in Ipswich which is another structure which has remained in transport use throughout its life.

The tram depot in Constantine Road, Ipswich was opened for electric trams in 1903 (along with an adjacent power station) with the first tram services running on 21st November 1903. It was used for trams all the way until the last tram ran on 26th July 1926 at which point all tram routes were converted to trolleybus operation. Trolleybuses had in fact started three years earlier on 2nd September 1923 with the depot having been used for them in addition from this date. It wasn’t to be until 14th May 1950 that Ipswich Corporation would run their first bus services and then trolleybuses ended on 23rd August 1963. Buses then had sole use of the depot and it has been extended at the rear to make it twice the size (its original tram capacity was just 26). It also has a large parking area at the rear of the garage. It is now operated by Ipswich Buses – a council owned company. 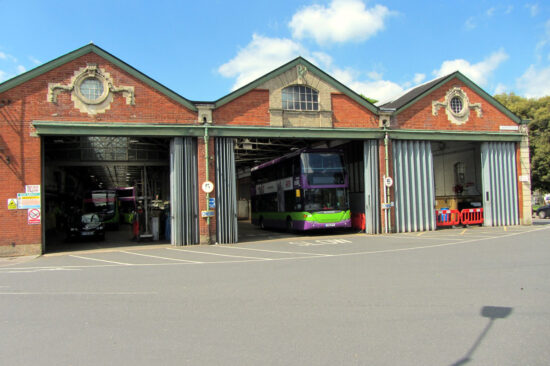 A general view of the depot showing the interior areas where once trams would be found. (Photograph by Bob Hodges, 24th May 2019)