Posted on Wednesday 12 May 2021 by Gareth Prior

In this edition of “Still Standing” we find some old tram track in London which used to be the entrance to the Highgate Horse Tram Depot.

The entrance to Highgate Horse Tram Depot is near Archway on Holloway Road. The depot itself was opened by the North Metropolitan Tramways Company in 1873 before being taken over by the LCC on 1st April 1906. It only lasted a further year with it closing in 1907 as all the routes in the area were fully electrified. This piece of track is thus a remarkable survivor with it having remained in situ for well over 100 years with the entrance between two buildings which extend over the track. 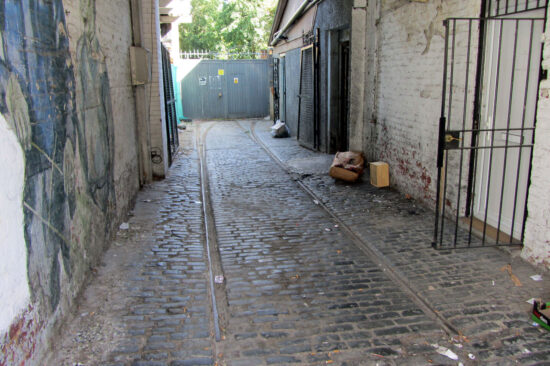 On 15th September 2019 and we see the track at the entrance to the depot. The actual depot buildings and stables were beyond the gates in the background but are no longer in existence. (Photograph by Bob Hodges)