In Pictures: Blackpool 007 returns to action

Posted on Wednesday 12 May 2021 by Gareth Prior

We reported last week after 001’s return to service in Blackpool after a short period out as it received attention at Starr Gate Depot and the fleet of Flexity2 trams available for use ahead of a timetable improvement has also increased further as well with 007 now back in action.

007 was first noted in service again on 2nd May 2021, this was believed to be its first passenger use for nearly two years with the last reports of its use being in August 2019. Its not known what has kept the tram off the road but there is no doubt its return is a positive sign of the Flexity2 fleet and should hopefully mean later this year when services increase – and in the future when trams will also run to Blackpool North Railway Station – that there is enough capacity out on the tramway. This now just leaves 004 as a long-term absentee from service. 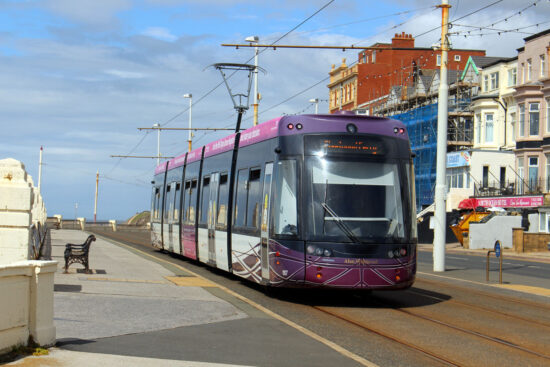 Same adverts, same name, same livery – in fact there is very little to show that 007 has spent nearly two years out of service! It is seen here approaching Gynn Square from the south with a service to Fleetwood Ferry. (Photograph by Tony Armitage, 10th May 2021)

1 Response to In Pictures: Blackpool 007 returns to action