Posted on Wednesday 28 April 2021 by Gareth Prior

In this latest edition of “Still Standing” we take a look at a surviving depot in the West Midlands which was for a time a transport museum but has more recently become the home of a nightclub!

Witton Lane Depot was first opened on 26th December 1882 by the Birmingham & Aston Tramways Co. Ltd and after a couple of changes of ownership was used by Birmingham Corporation Tramways from 1st January 1912. It was originally home of steam trams and trailers with a one track loco shed and a 7 track shed for the trailers. From 1st October 1904 it was converted for use by electric trams and would remain in daily use until 30th September 1950. It was later used the storage and scrapping of redundant trams as the tramway came to an end in 1953 and as with many other structures seen in this series it became a bus garage. From the late 1980s it became the Aston Manor Road Transport Museum until this too closed in 2011 because of funding issues (it reopened two years later in Aldridge), Subsequent to this the building has found use as a nightclub – we doubt there are many old tram depots that have done that! 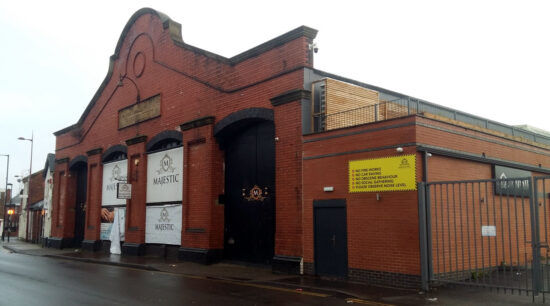 Witton Lane Depot as it is today. The old Tramways Depot sign still remains and the features of a traditional tram depot can clearly be seen. (Photograph by Jim Smythe, 3rd January 2021)