The latest of the M5000 trams on order for Manchester Metrolink from Bombardier has arrived at Queens Road Depot with 3125 being delivered on Saturday 17th April – back in its regular Saturday slot after the last arrival turned up in an usual midweek delivery.

3125 trod the well worn path across mainland Europe to the UK with its then being driven across the country to arrive in Manchester around Saturday lunchtime. With this being the 125th of the trams to be delivered the unloading process was soon completed with the tram then being transferred to the workshops for a start to be made on its commissioning ahead of an entry into service.

Just a few days after the arrival of 3125, the first of this new batch of M5000s returned to service having not been used since its two days in the lead up to Christmas 2020. 3121 was allocated to the Ashton-under-Lyne to Eccles service on Tuesday 20th April, very nearly four months since its previous use on 24th December 2020. With a recent press release from Transport for Greater Manchester (issued ahead of the expected increase of passenger numbers after the latest relaxation of restrictions) suggesting that the use of the new trams will be increased to allow for more doubles to run, hopefully it won’t be too long before the others are out and about in service again either! 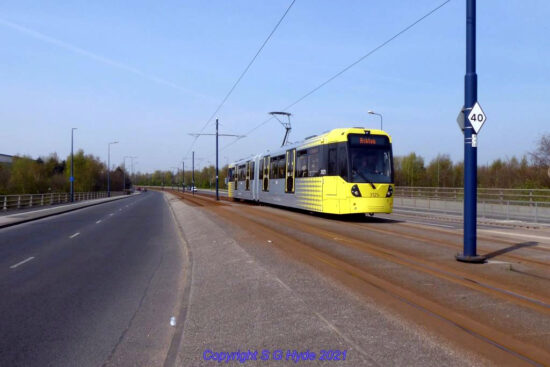 3121 heads along Lord Sheldon Way as it runs towards Ashton. 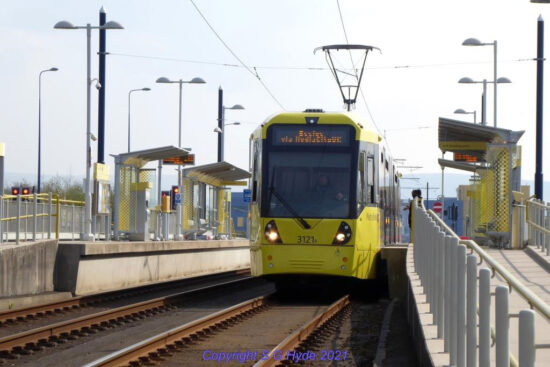 A second view of 3121 as it is seen at Ashton West on its return trip to Eccles. (Both Photographs by Steve Hyde, 20th April 2021)