As was revealed earlier this year, Blackpool Towing car 671 has a new home with its movement to the North West Museum of Road Transport taking place on Sunday 18th April. It will be a new exhibit at the museum when it reopens from Sunday 23rd May and is due to receive a repaint into original colours to represent the era before the Twin Cars were permanently coupled to their trailers.

Owned by the Fylde Transport Trust, 671 is the first of the trams which are expected to leave Rigby Road Depot over the coming months. It was announced at the end of last year that with more limited space being available at Rigby Road – as a result of a major redevelopment of the complex – that Blackpool Transport had been in discussions with those parties who had trams stored within the main tram shed about moving them during 2021 and 671 will not be the only one to find a new home over the next few months.

671 – which currently retains its Line 1 Metro Coastlines green and yellow livery – will become a static exhibit at the museum as the only tram currently located there. It will represent the era when the Twin Cars were not permanently coupled and is due to receive a repaint into the cream livery over the next few weeks. It may be the only tram there at the moment but it isn’t the first tram to be housed in the building! It was once the old tram depot in St Helens and since conversion to a museum it has seen trams such as Blackpool Coronation 304 housed there for a time.

In preparation for the move 671 was treated to a wash in Blackpool a few days before departure with Reid Freight then contracted to move the tram on Sunday 18th April. With a trouble free trip to St Helens the tram was soon unloaded in its new home. Work will get underway in the coming weeks to repaint it so it looks best for the public when they are able to visit it from the museum’s opening date of Sunday 23rd May.

Despite 671’s departure from Rigby Road there still remains a significant Twin Car representation on Blackpool Transport metals – 272+T2, 675+685 and 676+686 are all still in situ, albeit all are currently unserviceable although for set 5 there have been some attempts to rewire it in recent years. Trailer Car 681 also remains at Rigby Road with its ownership remaining with Blackpool Transport whereas its long-term partner is now owned by the FTT.

This is another positive development for Blackpool tram preservation allowing a tram – which last operated as a Twin Car in 2010 – to go on public display once more allowing the story of a previously unrepresented era to be told. It should also be positive for the North West Museum of Road Transport as a new tram exhibit should hopefully mean more visitors wanting to see it in position. 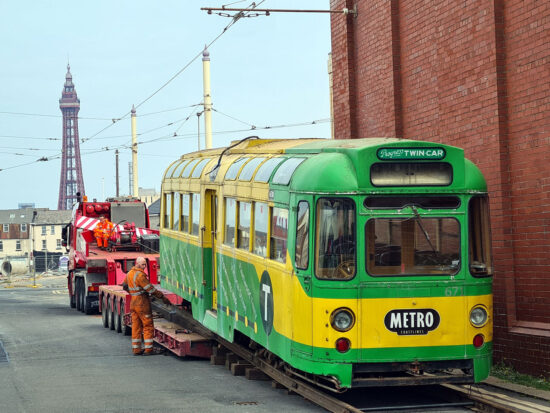 Farewell Blackpool! 671 is loaded on Blundell Street at the start of its journey to St Helens. 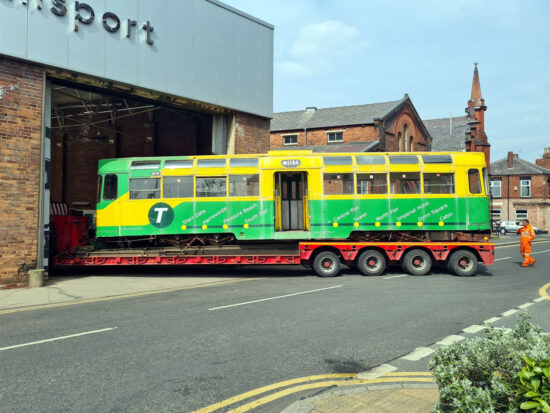 Arriving at the North West Museum of Transport. 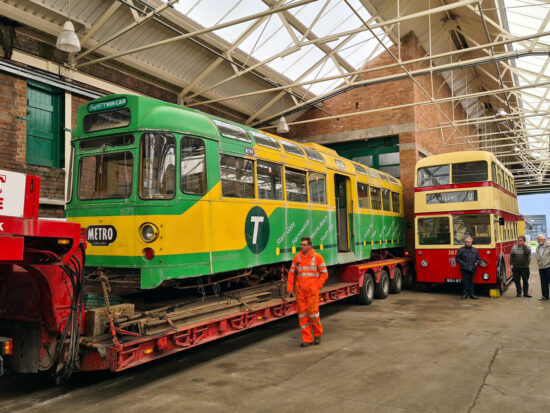 Inside its new home and before unloading from the trailer took place. (All Photographs courtesy of the Fylde Transport Trust)