In Pictures: More progress in Leith

Posted on Thursday 15 April 2021 by Gareth Prior

The big project to bring trams to Newhaven in Edinburgh is continuing with it appearing that excellent progress continues to be made in various areas of the route, a line which is due to open during the first half of 2023.

The latest “Progress Route Map” released at the start of March – and which can be viewed at https://www.edinburgh.gov.uk/tramstonewhaven/downloads/file/416/progress-route-map-february-2021-pdf- – shows how much progress is being made with a handy colour code used to show exactly what has been happening in each section of the line. The vast majority of the line has seen some progress with the largest section yet to see any tram work being that between York Place (the end of the current line) to just beyond the location of the Picardy Place tramstop at London Road.

We have seen during our regular pictorial updates that track has been laid in various areas with new road surface also been installed on top of this. There has also been some progress on the construction of tram stops with work now having got underway at the Foot of the Walk to put the tram stop in here. This has involved the closure of the eastside of the footpath between the Foot of the Walk and Laurie Street.

Much more work is also underway and the best way to keep abreast of what is happening is to sign up to the fortnightly progress emails from the Trams to Newhaven project at https://www.edinburgh.gov.uk/tramstonewhaven/newsletters-1. 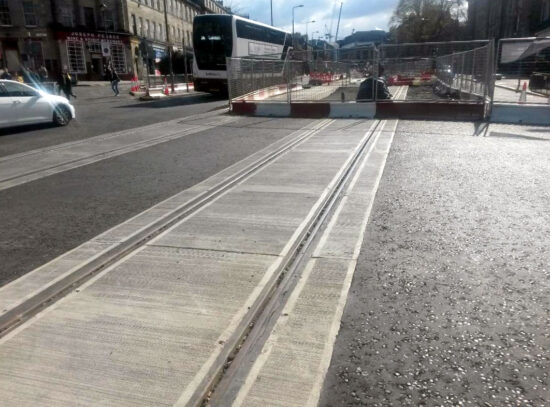 The first section of roadway to receive its completed tarmac surface is at the junction of
Annandale Street with Leith Walk and is now being used by traffic. 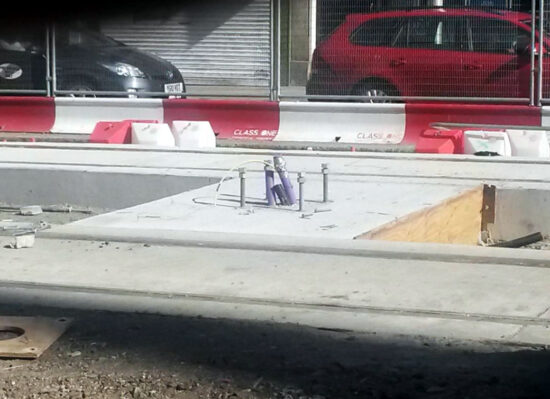 A shot of a concrete base complete with foundation bolts to support the centre poles on Leith Walk. As well as supporting the overhead wires these centre poles will also carry the street lighting. (Both Photographs by John Hampton)