Posted on Thursday 25 March 2021 by Gareth Prior

Today’s “Trams &” is off to the Crich Tramway Village’s “Best of Sheffield” event in May 2014 again as we take a look at the most modern of trams from the South Yorkshire city held as part of the national collection.

In the below photo we see Sheffield 510 stopped outside The Red Lion in warm and sunny conditions. Its stopped a bit sooner than trams would usually come to a halt but there is a very good reason for that – its posing for photos alongside one of First Sheffield’s modern buses which was visiting for the event! 510 needs very little introduction having been reliveried for Last Tram Week in October 1960 including various images of trams past in Sheffield on the side, a livery that has stayed in place ever since (albeit with some restoration work).

But for this website the bus will need a little bit more information! The bus was one of two First Sheffield buses to receive a heritage repaint and also received a new registration plate at the same time (3910 WE). It is a Wright Eclipse Gemini and carries the fleet number 229. You may also notice that both tram and bus have the same destination – although the bus is a bit modern than an old fashioned roller blind. The date was 17th May 2014. 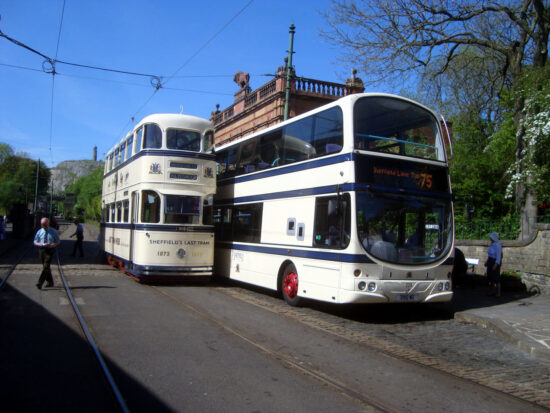