The first day of services saw healthy loads on services as both locals and enthusiasts wanted to enjoy the service for the first time. The service is fully in the hands of M5000s and sees trams run from Rochdale Railway Station to East Didsbury every 12 minutes Mondays to Saturdays and between 0900 and 1800 on Sundays and Bank Holidays (trams run every 15 minutes at all other times). Of interest is that some of the journeys on the line are operated by double M5000s at peak periods with splitting taking place at East Didsbury – is this the first time scheduled services on Manchester Metrolink have split during the day? This means that the Bury-Altrincham direct service is no longer the only route to see double trams operating on a regular basis (with the exception of the doubles used to Etihad Campus when Manchester City are playing).

The opening of the line has come several months ahead of schedule (opening was not due until the summer) a fact which Transport for Greater Manchester are rightly proud of (especially after the delays in opening of most of the other extensions previously opened). The next extensions expected to open is the line to Ashton with services due to commence in winter 2013/4. This will be followed by lines to Oldham and Rochdale town centres and Manchester Airport via Wythenshawe ahead of the hoped for Second City Crossing. 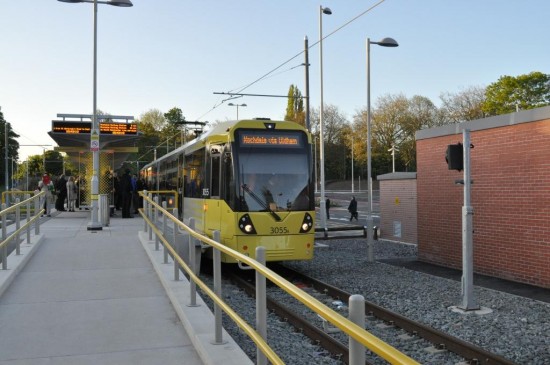