Posted on Thursday 23 May 2013 by Andrew Waddington

The 50th anniversary of V.E. Day in May 1995 was acknowledged by two different trams at Blackpool, both of which were returned to approximations of their 1940s appearance. The more obvious of the two was Blackpool Balloon car 703 which was repainted in the mainly green wartime livery and refitted with a trolley pole, but Bolton 66 also received some minor livery alterations to portray how it looked during the Second World War, when it had been renumbered 366.

Renumbering of trams during the war was often done rather crudely, and this was replicated by 66 which simply had a ‘3’ added to the left hand side of the existing gold numerals on its dash panels. Other changes included painting of the normally cream upper decency panels in maroon (directly above its ‘Acdo’ advertisements), and the repainting of the car’s bumpers and the edges of its platform steps in white. Finally, the name ‘Bolton’ was covered up on the rocker panels – a common practice intended to make it more difficult for the enemy to identify their whereabouts. This did look slightly odd however, due to the shade of paint used to cover the word which looked peach rather than cream! Due to the fact that the tram was being used in ordinary service on a public transport, the ‘blackout’ headlamp masks were not added and the destination boxes remained untouched, but the treatment of Bolton 366 still provided a real sense of nostalgia.

66 ran regularly as 366 throughout 1995, and was then treated to a full repaint in 1996 restoring its more familiar identity. Of course the tram remains in Blackpool where it is part of the heritage fleet, having operated there since 1981. 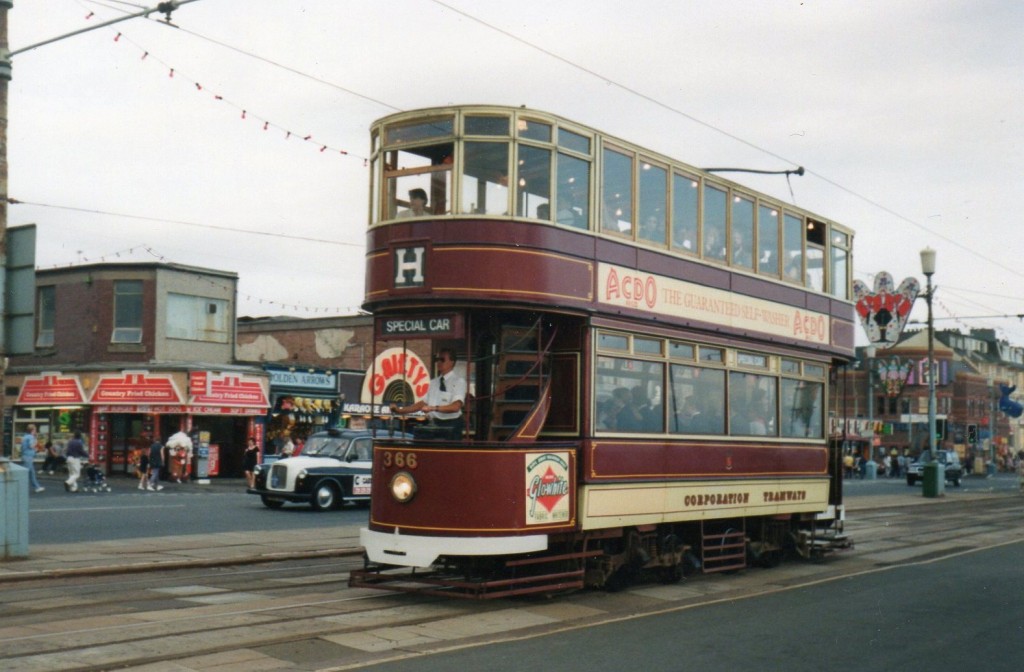 Bolton 366 seen near Foxhall Square in July 1995. This photo was taken after the Fleetwood Transport Festival, with 366 being used on promenade specials after the event had ended. (Photo by Tony Waddington)