No sooner had it been announced that due to the overrunning of the engineering works in Blackpool trams would continue to run between Harrow Place and Cabin for an extra seven days, then trams returned to Starr Gate earlier than originally planned let alone the revised plan!

Since a tram service started to run again on Monday 22nd February they had only been operating from Harrow Place to Cabin to allow for some work to take place at Starr Gate but as from Friday 26th February the service started to run from Starr Gate to Cabin. The originally released plan was that a full tram service would resume from Sunday 28th February with the Harrow Place-Cabin service continuing until then but earlier this week it was confirmed that the work was being extended and no trams would run any further north than Cabin until Sunday 7th March. It was also announced that Harrow Place would remain as the temporary southern terminus for this period but less than 24 hours later and this was changed to allow Starr Gate to be served once more. 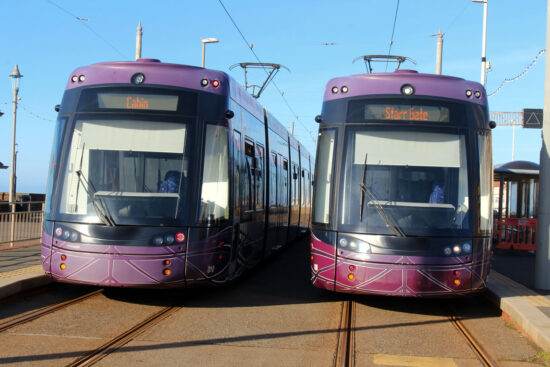 010 and 008 stand at Cabin with 008 on the left showing the return of the Starr Gate destination. (Photograph by Tony Armitage, 26th February 2021)