Posted on Thursday 25 February 2021 by Gareth Prior

For the second in the series of “Trams in Unusual Places” we are taking a trip to Nottingham’s Old Market Square. It may not be a unusual to see a tram with Nottingham Express Transit having been running through there since 2004 but a horse tram from another town is not your usual fare!

In recent years Chesterfield 8, now a permanent part of the national collection at Crich having previously been on loan, has made a couple of trips away from the Crich Tramway Village, including one to its home town. But in this photo we take a look at the tram when he visited Nottingham City Centre.

On 22nd September 2018 there was a celebration of Nottingham City Transport’s 140th anniversary with the company tracing its history back to tram days in the city – including when they were operated by horses. Horse trams had run in Nottingham between 1878 when the first tram routes run by Nottingham & District Tramways started and 1902 when Nottingham Corporation Tramways (who had taken over the routes in 1897). The horse tram fleet included 27 single deckers and 15 double deckers.

Although the single deck trams were built by Starbuck and Chesterfield 8 was built by G F Milnes it was requested as a historic vehicle to be put on display in Old Market Square for one day alongside other heritage vehicles. 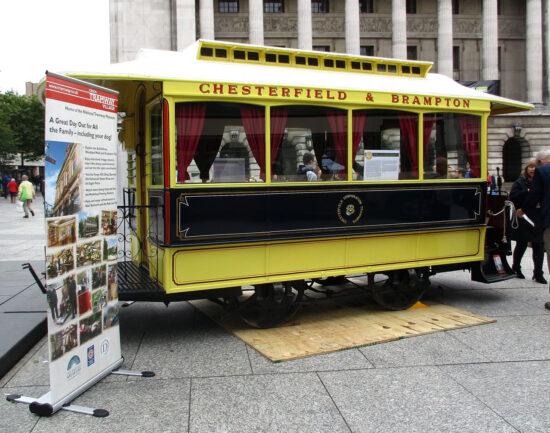 8 was unloaded and placed on a small section of wood for the duration of the event and is seen on display here. The modern tramstop is the right of this shot. 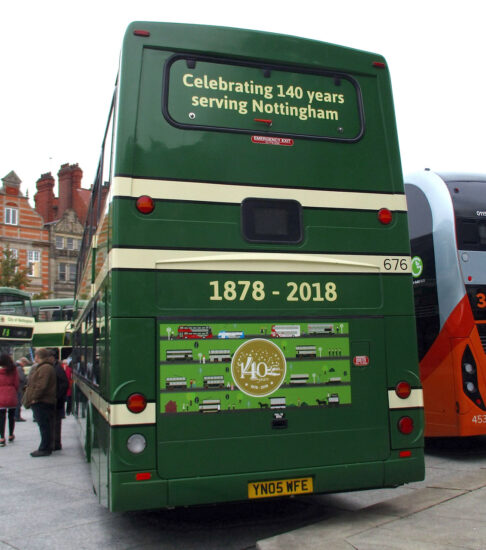 Modern buses from the Nottingham City Transport fleet got in on the act as well including this one which had a special commemorative message including images of transport through the 140 years. (Both Photographs by Hazel Quarmby, 22nd September 2018)