Posted on Monday 13 May 2013 by Andrew Waddington

The old inspector’s cabin located at Blackpool Pleasure Beach, adjacent to the tramway turning circle, has recently been redecorated to improve its appearance. The building has been enhanced by vinyls promoting the company’s heritage and illumination tours by tram, as well as directing passers-by to the nearby heritage tram stop.

The kiosk has also been adorned with images of some of the most appealing members of Blackpool’s heritage tram fleet, including Standard 147, Boat 230 and the Western Train 733+734. This will hopefully improve awareness of the continued operation of these traditional trams, and encourage more passing trade. The new look hut was unveiled just before the recent spell of heritage tram tours over the May Day Bank Holiday weekend, and gives this often neglected structure a much smarter appearance. 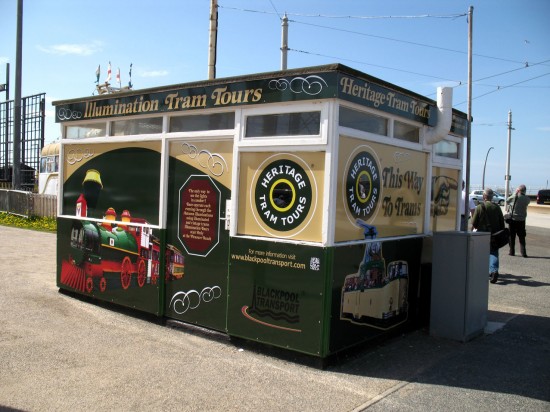