In Pictures: Antlers returned to Edinburgh Trams for Christmas

Posted on Saturday 2 January 2021 by Gareth Prior

One of the features of Edinburgh Trams over the last couple of years had been the application of antlers and reindeer names to some of the trams in the fleet in the lead up to Christmas but with 2020 being a somewhat odd year it had appeared that this “tradition” would not be met – but it did happen albeit on a limited basis.

Only one tram was spotted with the special Christmas vinyls and this was 255, which also retains adverts for Forever Edinburgh. The tram has not only received the antlers on the side of the tram but has also received red noses and the name “Rudolph”. The name is carried on one side only at each end with the noses and antlers on both sides, both ends. 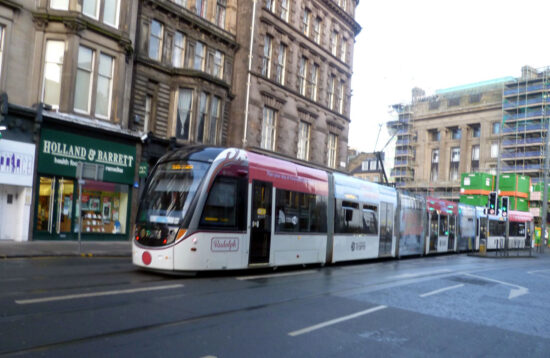 255 is seen here citybound at Shandwick Place showing off its antlers, nose and name. The building in scaffolding behind the tram is the former Frasers department store which is now being transformed into the Johnnie Walker whisky attraction due to open in 2021. (Photograph by Roy Calderwood, 28th December 2020)