Today we continue our trip back to 1976 for another view of the Blackpool Tramway during the early September period.

This time we are again featuring one of the ubiquitous Balloon Cars with the first of second series cars which were built as enclosed cars in the 1930s by English Electric. Built as 250 this tram arrived into Blackpool in the last month of 1934 and was soon in service transporting passengers along Blackpool Prom. It was an early convert to single destination indicators which this occurring in 1955 and in 1968 it received its now familiar number of 713 during the mass renumbering. The tram remains in Blackpool today although has received modifications, none more obvious than the widened centre entrances.

This photo shows 713 just south of Tower as it works south to Starr Gate. In traditional green and cream colours plus a between deck ad for Empire this picture has been taken from the access ramp to the old Tower overbridge which remained in place until it was removed in 2009. 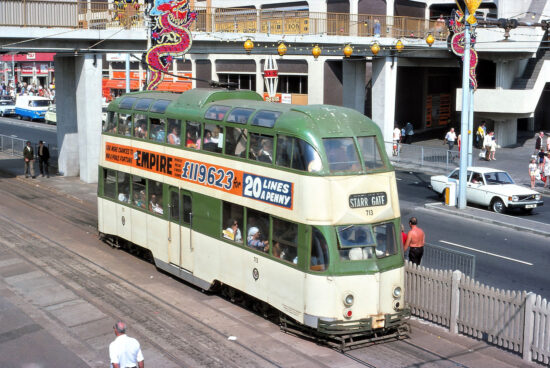