Its another trip out and about in 2020 as we take an aerial view of a tram in Edinburgh City Centre.

This photo was taken from the one of the upper floors of the Debenhams store on Princes Street (a store which will be one of the first of those stores to close having only been there since the 1980s) and shows one of the trams advertising Parabola – either 274 or 276 – running to the Airport from York Place. The Debenhams building is in fact due to be converted to a hotel in 2023 so the store wouldn’t have been there for the long-term anyway. 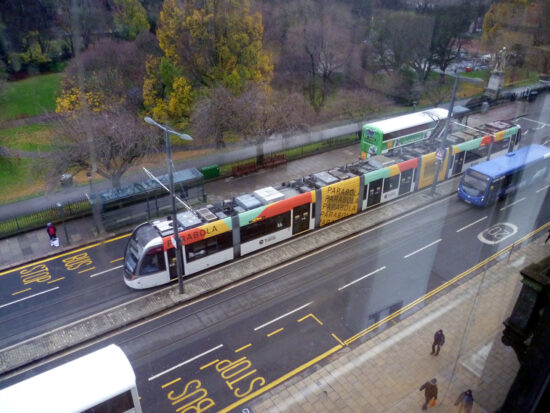 As the tram runs westbound to the Airport along Princes Street we see a blue First Scotland East single decker inbound from West Lothian while the other side is a Lothian Buses double-decker. West Princes Street Gardens is in the background. (Photograph by Roy Calderwood, 7th December 2020)