As we look into the archives again today, this edition of “Picture in Time” take a look at one of the popular Blackpool illuminated feature cars.

Of all the currently operational Illuminated Trams there is no doubt that the most popular with both the general public and enthusiasts is the Western Train (when its not under overhaul of course!). Originally built in 1962 using English Electric Railcoach 209 for the loco and Pantograph 174 for the carriage the tram continued running each autumn illumination season until it had to be withdrawn from service after the 1999 season needing workshop attention. After 10 years out of service it triumphantly returned to action in 2009 thanks to a Heritage Lottery Fund backed restoration project and has remained active ever since. With workshop attention again from the start of 2020 the tram will soon be looking its best once again.

In this photo – taken from the top deck of another tram – we see the Western Train rounding the Metropole Hotel on 21st September 2009 doing what it does best! 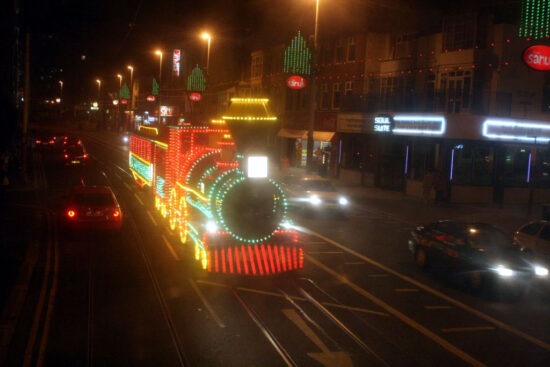