Posted on Saturday 5 December 2020 by Gareth Prior

In this edition of “Lockdown Walks” we are again in Manchester and show one of the M5000 trams in action.

It has now been over 11 years since the first M5000 arrived in Manchester with 3001 making the journey from Germany and arriving at Queens Road Depot on 13th July 2009. The order for the first 120 was complete seven years later on 1st October 2016 with 3120 arriving but a further 27 have now started to arrive in the city to add capacity to the network. The example in this photo – 3061 – turned up in Manchester on 1st December 2012. 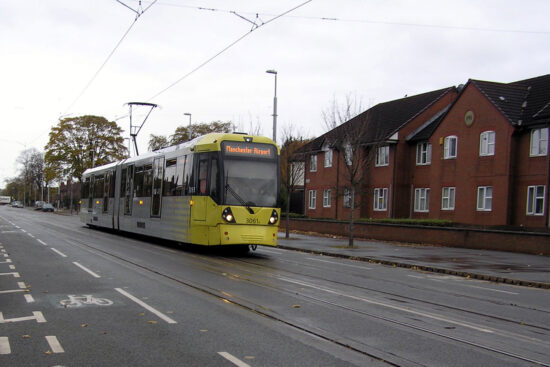 3061 is seen here on Hardy Lane as with a service to Manchester Airport. It is about to leave street running as it will shortly cross the River Mersey and head on to Sale Water Park. (Photograph by Keith Chadbourne, 1st November 2020)