Posted on Saturday 5 December 2020 by Gareth Prior

It’s a trip to Crich for us in this edition of “Trams &” as we see not one, but two trams alongside a visiting bus.

In this photo the two trams we spot are Blackpool Brush 630, which is heading north up the line, and Leeds 399, which is just arriving back on the museum street ready to terminate with a service from Glory Mine. The two trams are seen outside of The Red Lion with Crich Stand seen through the murk is the distance.

The trams are not the only vehicles that feature in this image though as they are joined by former London Transport Routemaster RML 2276. Still with its branding for when it worked on route 12 in London the paintwork on the bus shows the signs of many years of hard service. The date of this photo is 13th June 2015. 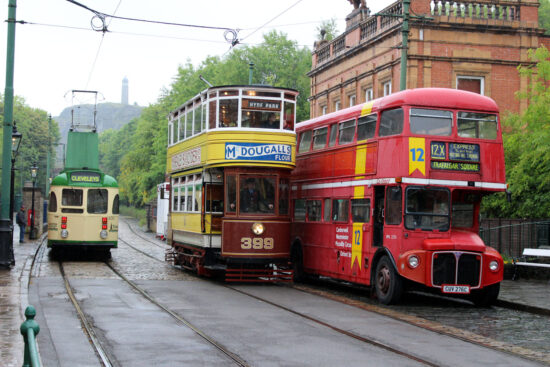