As we’ve all seen over the years probably the number one location for getting photos of trams with the biggest variety of other vintage transport is Beamish and that is where we go for this edition of “Trams &”.

On 12th April 2012 – a rather wet day by the looks of things – “Sunderland 101” (of course in reality Blackpool Balloon 703 undergoing an identity crisis) is working around the tramway circuit in a clockwise direction and is just at the stop at Foulbridge (for Home Farm, the Pit Village and the tram depot). “101” has since returned to Blackpool where it is now stored at Rigby Road waiting for work to return it service (it had been withdrawn at Beamish needing workshop attention hence why it became surplus to requirements at Beamish).

It is just being passed by Burrell Showmans Road Locomotive “Winston Churchill” a 1922 built vehicle which is often seen visiting Beamish during special events. And this was one of those said special events – the Great North Steam Fair. 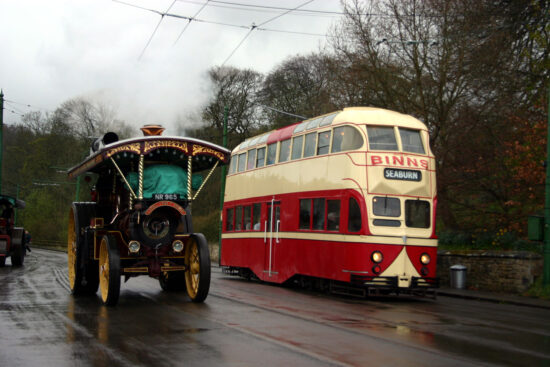