Posted on Monday 17 August 2020 by Gareth Prior

Today we have another image from the 1985 Blackpool Tramway Centenary showing two very special trams – including one which, incredibly, we haven’t previously featured in the Blackpool edition of “Picture in Time”.

That tram is the tram we see at the front of a queue on Central Promenade – Dreadnought 59. This tram is the sole surviving Dreadnought having been built back in 1902 and remaining in Blackpool until 1965 when it was transferred to Crich. Operating infrequently at the home of the National Tramway Museum, 59 was back in Blackpool from 1975 and was operated between 1976 and 1990 before it was back to Derbyshire, initially on display at Crich and since 1995 in store at Clay Cross. It’s a tram that is very rarely out of the minds of enthusiasts wanting to see it restored to service, preferably back home, but for now remains secure at Clay Cross.

This photo shows 59 on Central Promenade just approaching Central Pier with a full load of passengers enjoying ride on a tramcar which was, at the time, just a mere 83 years old! It is followed by visiting tramcar Manchester 765 (just a stripling having been built in 1914) which was on loan for the period and you can just make out some of the advertising applied to the tram which helped to cover the costs. Further behind and we can make out a Brush Car in the 1980s style of fleet livery. 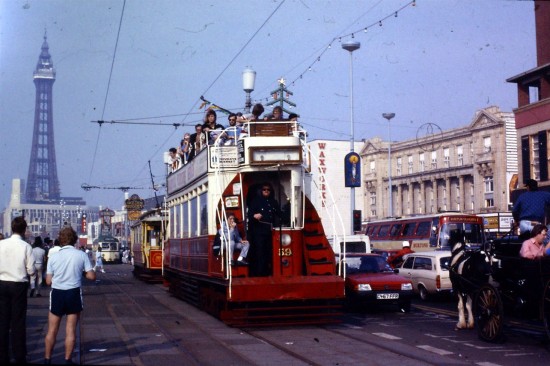