“Around the World in Trams” now moves on to The Netherlands for a selection of images taken in Amsterdam during March 1988.

In the below image we see two trams which have now been scrapped having given over 30 years service to the city. Both are Beijnes 4G trams introduced in Amsterdam during the early 1960s with 33 new trams (and one 1G model converted) built by the Dutch company Beijnes. Construction took place between 1959 and 1961 with the last of the class running in normal service during 2004. A number of the trams were sold on for further use in Poznan, Poland with one also being preserved.

This image shows 617 in a silver livery on the left which was built in June 1960 and continued in service until the late 1990s with scrapping coming during November 1997. Its fellow 4G tram seen in this view, 646, was introduced into service during September 1962 and would last in service a bit longer but it too would end up being scrapped in the July of 2002. Both trams are set to head to Centraal Station upon departure from Station RAI. 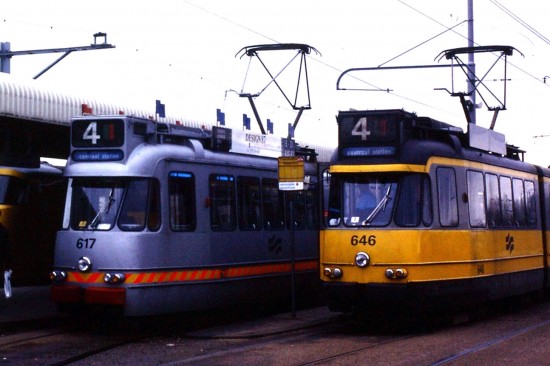