It’s a wet special event day at Crich for our latest look at a tram alongside other forms of transport.

The tram we again see here is London Transport 1622 which is waiting at the Town End terminus for departure up the line to Glory Mine. The dull and wet conditions allow the saloon lights to shine out of the tram, making it a very welcoming sight for those visitors huddling under the shelter and umbrellas as they inspect the buses.

We see three buses on the right of differing types. Closest to the camera on the right is Leyland Titan RTL 1163, no stranger to this series having previously been seen in the same shot as 1622, which was new to London Transport in 1951. The furthest vehicle is a 1937 AEC Regent I bus, STL2377, which only just outlived the trams in London being withdrawn in 1953 and now preserved at the London Bus Museum. The other bus seen here is of an earlier era and was built in 1925. It is a Dennis 4-ton bus, numbered D142, which originally entered service for an independent bus company before this was amalgamated into the London General Omnibus Company. Withdrawal came in 1931. It too is part of the London Bus Museum collection. 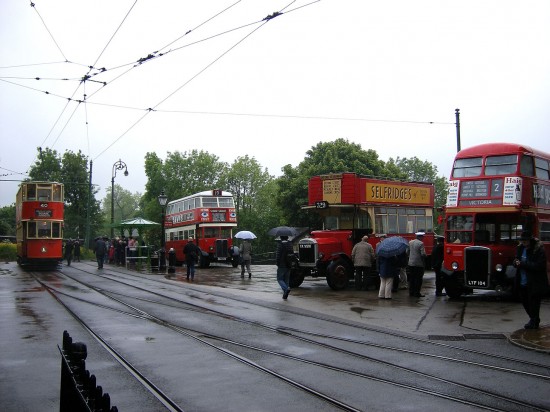