Well before Blackpool started heritage tram operation there was a short length of track in Bradford used for special outings by surviving Bradford tramcar 104 and in this edition of “Picture in Time” we are heading back over 60 years ago to see the tram in action.

Of course, mention public transport and Bradford and you are almost certainly going to think of trolleybuses but up until 1950 it also had an extensive tramway which at its height ran for nearly 65 miles across the city on the unusual gauge of 4’. When the tramway closed the trams were offered for sale and one ended up at Odsall Stadium in the city where it was as a scoreboard for a short period. But by 1953 it was rescued – possibly the shortest period of time a tram had been used for “other purposes” before being saved for preservation? – and moved to Thornbury works where they started on restoring it to service. With a truck from Sheffield the tram was restored by 1958 and for the next eight years it was used on special occasions on a remaining section of track from the road to the works entrance.

This became very popular with enthusiasts who were pretty starved of action as more tramways closed around the country and for 2 shillings and 6 pence (the equivalent of 12.5p!) you could have a drive! In the below photo we see 104 on this section of track with Tony Stevenson at the controls – this being the first tram he had the chance to drive. Sadly it wasn’t to last as with the trolleybus system closing, and the removal of the overhead it was no longer possible to run the tram. It has since found a home at the Bradford Industrial Museum. 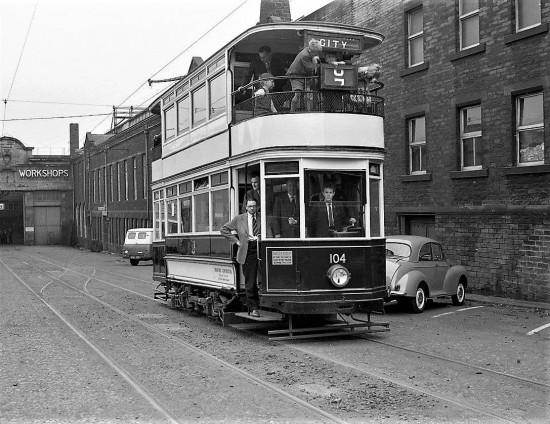