We take another trip to Blackpool for today’s dip into the archives and the year is 1998 for an image of two Centenary Cars in operation.

It’s the September of 1998 for this shot at Gynn Square. The southbound shelter looks as if it has seen better days as we see Centenary 641 passing as it approaches the northbound stop which the driver is just slowing for (the stop itself is just out of shot to the right). At this time 641 retained its roof advert boxes fitted when the tram first entered service and at this time was carrying an advert for Pricebusters, which for a long time was the bargain buyers paradise next to the Tower in Blackpool with a varied selection of stalls open selling almost anything you could ever want! This would be the only advert that 641 would carry in this condition, although once it went through a rebuild it would receive more. Pricebusters advertised on 641 between 1996 and 1999.

The second tram we see in this view is another Centenary, with 647 disappearing off south having just called at Gynn Square. 647 – the last standard gauge traditional tram built in the UK let’s not forget – is in an all over advert for Warburton’s Bread. This is the yellow design which was in place between 1997 and 1999 before it was replaced a purple design for the same sponsor. 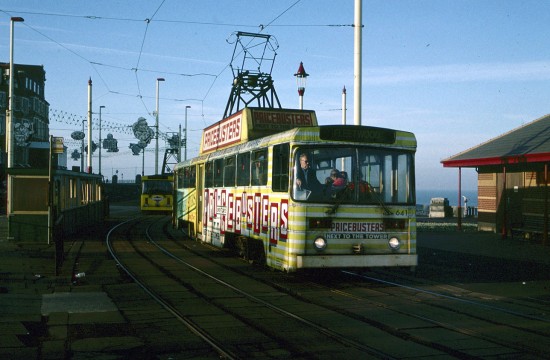