Posted on Wednesday 3 February 2021 by Gareth Prior

The latest entry into the “Tram Pub Signs” series is again in the northwest of England with one of the better examples of a sign at the Brownhill Arms in Blackburn.

The Brownhill Arms stands on Whalley New Road in Blackburn and is on what was once the old Blackburn Town Centre to Wilpshire route. The sign of the Brownhill Arms – a Thwaites pub, a brewer with connections to trams in Blackpool as they had an advert on Balloon 726 for several seasons – actually features the pub itself in the background (I’m not sure if that means that there is another tram on a sign on that pub – it could go on for ever!). In the foreground of the sign is Blackburn tramcar no. 65 which was one of a batch of 40 Milnes cars (numbered 36-75) built in 1901. The sign shows the tram with a top cover but it was originally built as an open topper before the entire class received top covers between 1923 and 1935. 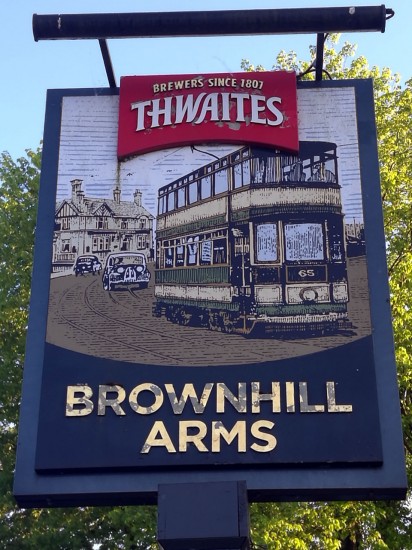 Considering some of the “interesting” examples we have seen in this series it has to be said that the Brownhill Arms sign is definitely one of the best featured so far and here it is seen in all its glory. (Photograph by Malcolm Bury)