We make another visit to Crich for this image of a tram and another vehicle. This time its London Transport 1622 with a single decker bus dating from the 1970s.

As with the last photo in this series this image was taken during Enthusiasts’ Day 2007 on 29th September of that year. We see London Transport 1622 just running down the main museum street passing the Workshop on the left and The Red Lion to the right as it approaches Stephenson Place. A regular performer in service at the time of writing 1622 is out of service but it was hoped it may return to action during 2020 – although this will be subject to Coronavirus restrictions, of course.

It is just passing a visiting Western bus blinded for a service to Glasgow. This bus is, according to good old Google!, a Leyland Leopard which was new to Western during April 1971 and was numbered 2341 in their fleet. 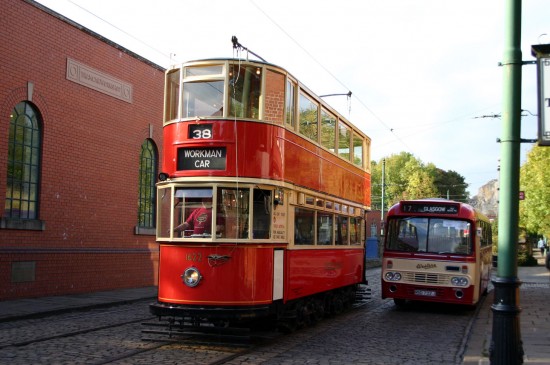