Back to 1975 once more today as we visit Blackpool for a view of the original Balloon Car – no. 700.

We’ve covered 700 at many points in its history during this series so no need to go into lots more detail again! Suffice to say it entered service in February 1934 as an open topper Luxury Dreadnought; originally carrying the number 226 this was soon changed to 237 as a result of further orders of Boat Cars. It became an enclosed car in 1942 and received the number 700 in 1968. Controversially converted into a B fleet Balloon in time for the upgrade of the tramway, 700 remains operational to this day although its use is mainly limited to heritage tours.

In this view on 6th July 1975 we see 700 just rounding the Metropole Hotel from the north with a service which will terminate at the next stop, Talbot Square (North Pier). The warmth of the day is clear to see with drivers windscreen wide open, saloon windows open and the conductor is ready for the next stop with the centre doors also open. Again, the trolley seems anything but straight! 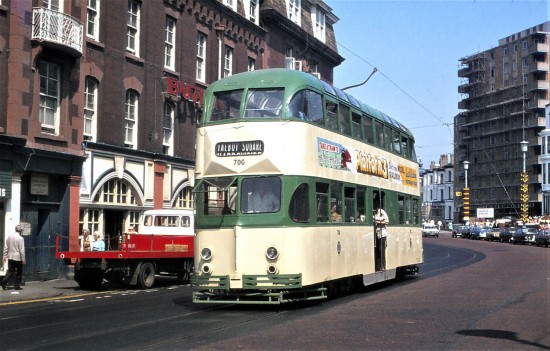