Whatever Happened To? Blackpool Centenary 643

The next tram we take a look at that appeared over the final weekend of traditional tramway operation in Blackpool is the first to longer be on the Blackpool Tramway.

That tram is Centenary 643, which only just qualifies as originally it wasn’t allocated to service during the weekend but came out as a replacement for fellow Centenary Car 645 on the very last day, Sunday 6th November 2011. Emerging during the early afternoon, 643, would remain on the Pleasure Beach to Little Bispham service until it headed back to depot at 1700, bringing an end to its operating career.

643’s life since has been varied but at no time has it run since that day in November 2011. It was initially sold to the Broadwater Caravan Park where it moved in January 2012 and whilst there received a repaint into a cream and green livery whilst being converted into a café. But that is not where 643’s subsequent career ends as just two years later in February 2014, the Caravan Park decided that they no longer had the requirement for it so it was off to Wyre Dock under the auspices of the Fleetwood Heritage Leisure Trust. It remained there until July 2016 when it was on the move once more having been selected to become the centrepiece for a learning disability school in Rugby. It received some further conversion work and at the time of writing is, as far as is known, still being used for the same purpose in the Midlands. 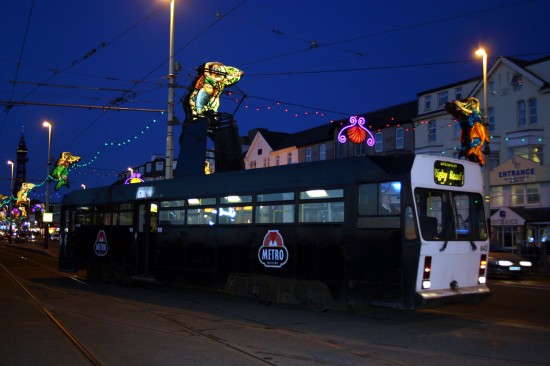 In 2011, 643 was in one of the least inspiring liveries ever seen on a Blackpool tram which the remnants of an old all over advert replaced by Metro Coastlines logos on the Black and White base. In this view we see the tram leaving the Prom for one last time on 6th November 2011. 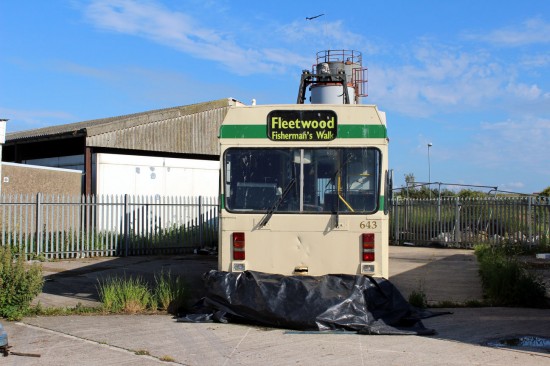 643 ended its days on the Fylde Coast in Wyre Dock where it was stored as part of the Fleetwood Heritage Leisure Trust collection before moving to Rugby. This 20th June 2015 view shows the tram stored showing its Cream and Green livery style. (Both Photographs by Gareth Prior)