We again take a look at a tram with other vehicles, and this time our featured tram isn’t only joined by a single vehicle but three buses of differing vintages.

Friday 27th September 2013 is the date of this image and it is taken on Rhos-on-Sea Promenade. The tram in this shot is, of course, Llandudno & Colwyn Bay Electric Railway 7, a tram which can be seen around North Wales at various events each year. This tram didn’t actually operate in Llandudno back as Bournemouth 126 it is similar to a fleet of trams which did make the trip from the south coast to the North Wales coast, numbered 7 to 15 in the Llandudno & Colwyn Bay fleet. It was restored to the condition we see it today in time for the Centenary of opening of the tramway in 2007 and has been hauled around the area ever since, by the trusty Matador lorry which can also be seen in this photo.

7 is joined by no fewer than three buses as part of a visit by a group of bus enthusiasts. On the left we see a Arriva open-top bus which was chartered to bring the party from Llandudno to Rhos-on-Sea. At the time a small fleet of open-toppers was based at Rhyl for then then summer service to Talacre to Prestatyn Holiday Camp (the location for the film Holiday on the Buses. These vehicles sometimes stood in for or provided duplicate “12” journeys between Rhyl and Llandudno but have now all been withdrawn from service.

Of the vintage buses the one closest to the camera is Crossville ECW bodied Bristol blinded for Robin Hood Camp. 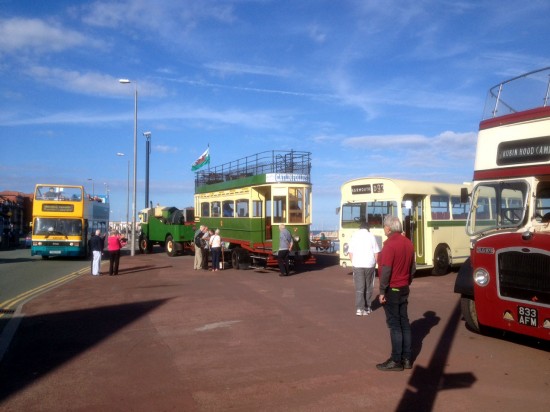