Around the World in Trams: Vienna 413

Today we visit Vienna for one final time in this batch of photos as we take a look at one of the trams operated by Wiener Lokalbahnen AG.

Trams in and around Vienna are operated by two separate companies, although both are still owned by Wiener Stadtwerke (Vienna City Council). Over the past few editions we have seen trams operated by Wiener Linien who run the trams, buses and U-Bahn within the city but this time we are viewing a vehicle operated by Wiener Lokalbahnen (WL) who operate a light rail line to Baden on top of bus services in Baden and even locomotive hauled freight trains.

This photo actually shows the two different types of trams operated by WL with one of the 400 class of Bombardier built trams closest to the camera. 14 of these were built between 2000 and 2010 and we see no. 413 here which is coupled to one of the high floor 100 class of trams (built by SGP between 1979 and 1993).

The location here is Karlsplatz and the date is 19th May 2012. 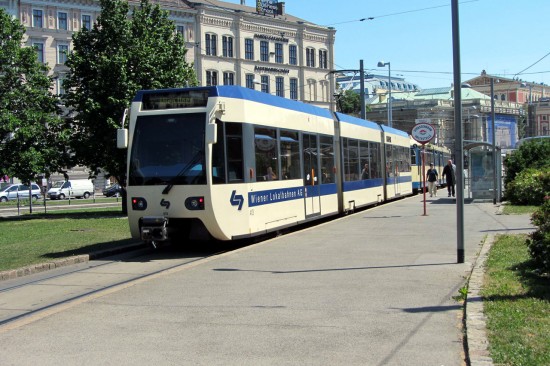