Posted on Thursday 16 April 2020 by Gareth Prior

We move forward a little more in time for the next couple of weeks as we reach 1990 for some more images from the archives at Crich.

This view shows Blackpool & Fleetwood Rack 2 standing at Town End terminus on 28th May 1990 with the conductor making preparations for its next journey up the line. The trolley has already been turned but there is no sign of the all important driver or indeed anyone wanting a ride on the tram! Also of note in this photo is on the embankment alongside the tramstop – The Red Lion! Now sitting a top the reconstructed pub further along the museum street 1990 was before this building was put up at Crich and so the lion was on display elsewhere!

In 1990 the condition of 2 was different to that which we are used to today with destination blinds and headlight in situ – both of which were removed in an overhaul in time for the Tramroad Centenary some eight years later. 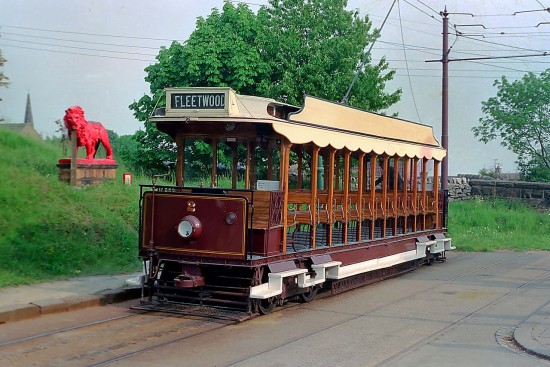